A letter to my Granddaughter 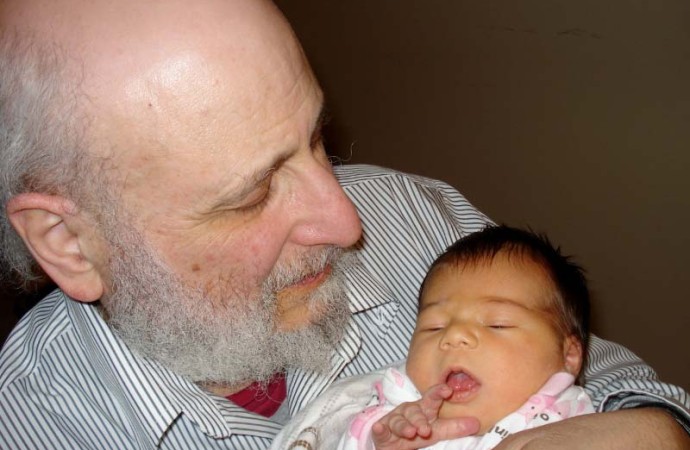 Author Richard Daitch pays tribute to his mother through a letter to his granddaughter Una Reta.

Dear Una Reta: While I understand that you have made dazzling strides since I last saw you, including sleeping for six hours one night and growing by leaps and bounds, I realize that at age two months you haven’t learned how to read.

Nevertheless, I am sure that your mother will read you this missive one fine day.

This is a letter about my mother, who died 12 years ago today.  If she had lived long enough to have met you, I am pretty sure that her first words to you would have been, “You’re the apple of my eye and the great granddaughter of my heart.”  She was a tiny woman with a very big heart and had boundless love for your mother and Aunt Sarah.  In fact, once when we were visiting her and your great grandfather in suburban Detroit, she offered to take your mother and aunt off our hands for a year.  “There is a very good school nearby and a lovely park within walking distance.  I’m sure the girls would have a great time.”  Your grandmother and I declined the kind offer and, at summer’s end, returned to the high Arctic with daughters in tow.

Like your mother, Great Grandma Reta was a great cook and made us our favourite meals when we visited.  I was always amazed that whenever family and friends came to visit and supper time neared, she invited them to stay and cooked up something delicious.  I began to suspect that my own friends timed their visits to coincide with mealtimes.

Great Grandma Reta loved children and her many nieces and nephews loved her back.  She was often asked for advice and guidance.  She was an enthusiastic baby sister and delighted in looking after your mom, aunt and her other grandchild, Daniel.  “You and Mary Pat work hard all year, why don’t you go out to a movie or play and I’ll look after the children,” she’d say.  Sometimes I felt that she wanted your grandma and me out of the way, so she could have our children to herself without parental interference.

You would have liked your great grandfather too.  He was a round and loquacious fellow.  He unconditionally loved his family, which included a large extended brood.  In fact, he thought the entire younger generation of those connected with him by blood were exceedingly clever.  That is, with the possible exception of me, who didn’t always bring home stellar report cards.

Fortunately, my sister Carolyn consistently received top marks, so he had to console himself with having a genius and a half amongst his offspring.  I can still see him at the Windsor Airport, when we’d visit from the far North.  He’d be grinning from ear to ear, arms outstretched, while your mother and aunt would run, as fast as their little legs could take them, towards a grandfatherly hug.

While Great Grandpa was exuberant and talkative, Great Grandma Reta was gentle and thoughtful.  She once told me, “Honey works better than vinegar.” Great Grandma put this principle to use on a regular basis.  She worked in a medical library at a major hospital in Detroit for a very bossy boss.  One of the challenges for the librarians was to retrieve overdue books. Great Grandma’s regal boss would telephone doctors and command them to return books. The doctors universally ignored the demand and held on to the errant books indefinitely.  Eventually, the boss would hand a list of medical culprits to Great Grandma and ask her to have a go. Invariable, using the honey works better theory, Great Grandma would retrieve every tardy book. Her boss thought she possessed magical powers.  “I don’t know how you do it, Reta,” she’d say with a perplexed sigh.

I learned other lessons from her.  When I was about four, she took me on a bus from our northwest location to downtown Detroit.  On the way, I laid eyes on the first black person I had ever seen, a lady carrying shopping bags.  I shared my discovery with my mother.  It was long before Dr. King had his dream, but my mother shared a similar sentiment. “A person’s skin colour doesn’t matter.  It’s what in her heart that counts.  If she has a good heart, she’s the same as you and me.”   The lady with the shopping bags smiled at me, and I was sure that she had a good heart.

Una Reta, you come from a long line of people with good hearts who value family  and would have treasured your addition to the clan.  In honour of the anniversary of your great grandmother’s passing, I lit a candle and cooked one of her favourite recipes, stuffed cabbage.  The recipe is in a thick, black binder of Grandma’s and is written in your Great Grandmother’s hand.  At the end she says, “I don’t always cook it exactly the same way, but it has good ingredients so with any luck it will turn out okay.”

The statement reminds me of raising a child.  The ingredients may vary, but if one of them is great love, the outcome will be fine.  The stuffed cabbage turned out to be a delight, as I am certain you too will be, because the essential ingredient is there in abundance.