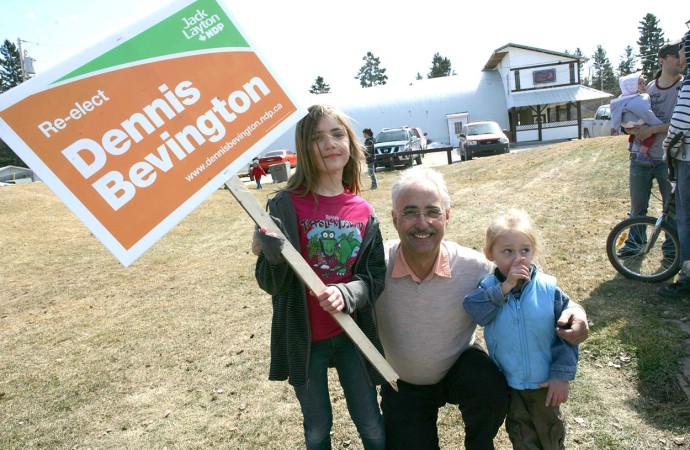 Liliana and Sebastian Kikoac joined their grandfather Dennis Bevington at a campaign barbeque in Fort Smith on May 1.Photo: Paul Bannister.

NDP incumbent Dennis Bevington was re-elected to the Western Arctic seat on May 2, winning by a wide margin over his Liberal and Conservative rivals to join 102 other NDP MPs as the new official opposition.

Bevington won his third straight mandate from NWT voters after a tight campaign many predicted would be a close three-way split between Bevington, Joe Handley and Sandy Lee.

Instead the results came in with the NDP candidate well ahead, winning with 7,140 votes, over 2,000 more than the second place Conservative candidate Lee.

“Northerners are looking for a very progressive, NDP type message, and that’s what we see,” Bevington told The Journal soon after the results were announced. “I hope it shows the Conservatives that I speak for Northerners.”

Only 55.5 per cent of NWT eligible voters cast a ballot.

Bevington becomes one of the most experienced MPs in an NDP caucus that suddenly grew from 36 to 103 members, largely on the back of a Quebec surge.

He noted that the NDP elected northern MPs in Quebec, Saskatchewan and British Columbia, which he said would add to the party’s ability to stand up for Northern issues in parliament.

Bevington, born and raised in Fort Smith and formerly the mayor of the South Slave community, said one of the major priorities facing the NDP as the new opposition party is to ensure important programs do not get cut as the Harper government tries to deal with a $40 billion deficit.

Meanwhile, Conservatives were elected in both other territories, with former Health Minister Leona Agglukak re-elected in Nunavut and newcomer Ryan Leef beating incumbent Liberal Larry Bagnell by just over 100 votes in the Yukon.