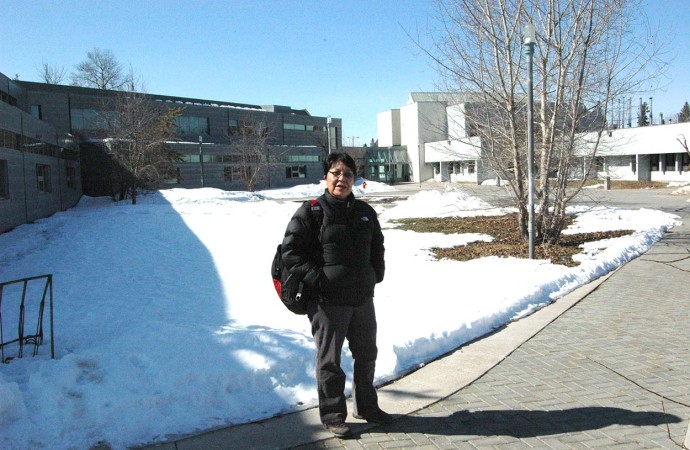 Mary Rose Casaway of Lutsel K’e not only graduated with a business administration diploma, she was Thebacha Campus’ co-valedictorian with her sister Elizabeth Catholique.

A big part of Mary Rose Casaway’s decision to enroll in Aurora College’s Business Administration Program had to do with her daughter going to high school in Fort Smith.

The community is a long way from their home in Lutsel K’e, and she wanted to be close enough to offer support while her girl finished her own education.

But two years later, as she got set to accept her diploma, Casaway said she is proud of herself for reaching her goal.

“I’ve always wanted to go back to school, I just never got around to it,” she said. “I was too busy working, and then the kids came and the money was good. But so many things are changing around us, so I’m glad I came back.”

Having two years of education under her belt, Casaway figures she has become a better decision maker.

“I would like to think that if I have an opportunity or a challenge in front of me, I’ll be able to make a better decision and meet that challenge,” she said.

Business Administration program director Margaret Dumkee said Casaway and all of the program’s graduates should be proud of what they have accomplished.

“I really hope that everybody who leaves here feels like they have a piece of paper that has a lot of meaning to it, and that they recognize the value it has,” Dumkee said.

A big part of the program is the attempt, as Dumkee put it, not only to provide the educational skills for working in the system, but to educate students on all aspects of economic independence, both personally and as a community.

That is a message Casaway heard loud and clear, something she said resonates with the challenges facing Lutsel K’e.

“It’s a big concern for me,” Casaway said. “People need to get out of the dependency trap, but it’s hard to get out. People need to be made aware, as some people don’t realize they are so dependent.”

One of the main benefits of the program and the college in general, according to Dumkee, is that students come from all across the North with their own perspectives, experiences and ideas on the way things should work in the NWT.

That gives teachers and students the ability to discuss and compare information presented with what happens on the ground in the North.

“My hope is the students will leave with some way to make a difference, and that we will continue to make a contribution to the employable people of the North,” Dumkee said.

Casaway said she has always wanted to open her own business, something she will consider once she gets back home to Lutsel K’e. But in the meantime, she has her old job with the government’s housing department in the community.

“I have a lot of ideas on business, but I’m heading to work as the housing manager in Lutsel K’e to pay my bills,” she laughed.

But she said that her college education opened her eyes to the possibilities, and she encourages anyone else who may be interested to take the same step and go back to school.

“If I can do it, they can do it,” she said. “I came here to get my business diploma, and I’ve reached that goal. It’s time for me to go home.”