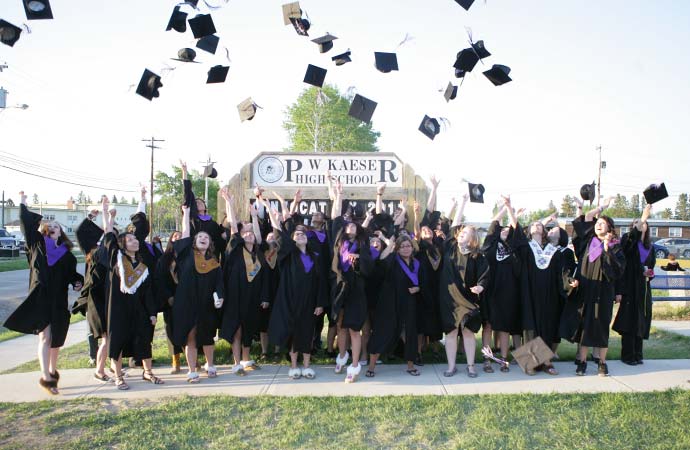 PWK’s graduating class toss their hats in celebration. Forty students graduated, including 12 from Phoenix and three from WALP.Photo: Paul Bannister.

The class of 40 graduates was buoyed by 12 students who graduated from Phoenix alternative school and three from the Western Arctic Leadership Program.

As always the community of Fort Smith came out to honour the young people, showering them with gifts and accolades as first they received their diplomas and awards and then, the following night, showed off with a grand march down the red-carpeted aisle.

PWK’s vice-principal summed up what many teachers and staff at the school felt about the class.

“They’re a very eager class and always willing to put a positive foot forward,” said Dan Kearley. “It’s a class I’ve see tremendous growth in over the years I’ve been here. All I can say is to keep doing what they’re doing because they’re on the right track.”

“I want to share something with you that I learned after I graduated and moved on to college and a job I took because the money looked good. In my heart, I really wasn’t satisfied with what I was doing. I stuck it out for five years only because of the money. My message to the graduates is no matter how thick or thin your wallet is, if your heart is content with what you do that’s what matters most,” said Paulette.

The Phoenix school graduates were a very positive success story, considering the trials the school has undergone this year. Despite obvious success in graduating students who slipped through the cracks of regular high school, Phoenix is facing potential funding cuts that will jeopardize the program going forward. Phoenix teacher Heather Villebrun said that no matter the difficulties the students at Phoenix faced, they managed to pull through and be an inspiration to the entire community.

“There’s always an intense feeling of pride and admiration of them,” Villebrun said. “Most have plans to continue their education, and I can’t wait to see what they’ll do. This is their first step, and I think they know now that they’re capable, they can reach the goals that they set.”

The graduates have less than one month left of high school, before heading on to a wide range of options. Some will head south for university or college, others to Aurora College in Fort Smith or Yellowknife. Others will start apprenticeships or a job, and still others plan to travel and try to figure out what comes next.

For each grad, last week marked both a beginning and an end. Surely the support and encouragement of the community will stay with them a long time.