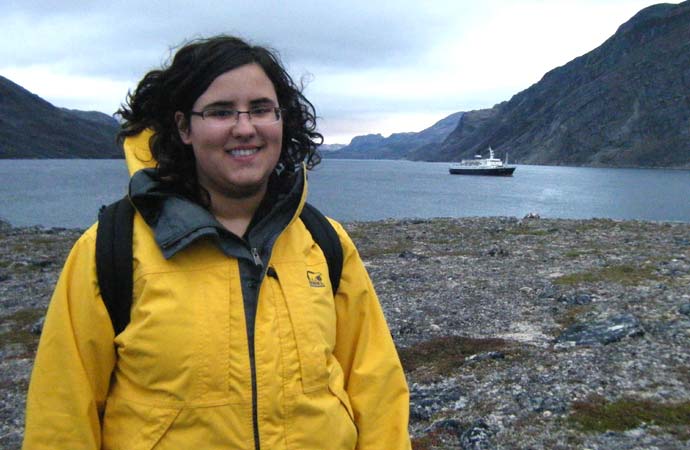 Nicole Labine’s Arctic trip in 2009 has inspired her father to do the same.

A Fort Smith man says he was so inspired and intrigued by his daughter’s trip to Antarctica in 2009 that he has decided to go this year as a chaperone and teacher.

Michel Labine will join 60 youth from around the world for a two-week trip through the Arctic from July 23-August 7, visiting Iceland, Greenland, northern Labrador, Nunavut and Nunavik.

Labine’s daughter Nicole travelled the Arctic with Students on Ice in 2009 before heading to Antarctica with the group over last year’s Christmas holidays.

Labine said his daughter’s experiences, and the changes he has seen in her since she travelled to the poles, have left him curious about the organization and the trips it hosts.

“I researched Students On Ice and after reading about the team leaders and scientists it became obvious that these people had the tools to affect change in the minds of the fortunate students who were lucky enough to take part in these incredible opportunities,” Labine said.

Labine is an artist who spent 27 years working as a renewable resource officer with the government of the Northwest Territories.

His last major art project was Drums of the Circumpolar, a collection of stained-glass drums that depict the cultures of peoples in the circumpolar world.

He said he will be relating the experiences and lessons he learned while making the drums to students on the trip. Those lessons encompass both the different drum-making techniques of various cultures around the Arctic, and the wildlife, people and environments found around the circumpolar world.

Labine will also share his extensive knowledge of wildlife in the NWT and working around the Arctic.

Any high school students between the ages of 14-18 can apply for the trip. The deadline to get a scholarship to attend has passed, but a spokesperson with Students on Ice said the group is still accepting applications and would be happy to have more youth from the NWT.

In 2009, soon after returning to Fort Smith from her Arctic adventure, Nicole Labine told The Journal the trip opened her eyes to the effects of climate change in the Arctic.

“I got to see other people who are passionate and care about (climate change) and gain support,” Nicole said at the time. “Half the world population is under 30 and we’re going to see the extremes in our lifetime. It’s important that youth have a voice. We should have input in policies.”

Her father will now be part of a 45-person adult group of scientists and activists aboard the MV Clipper Adventurer, along with 60 youth from around the world.