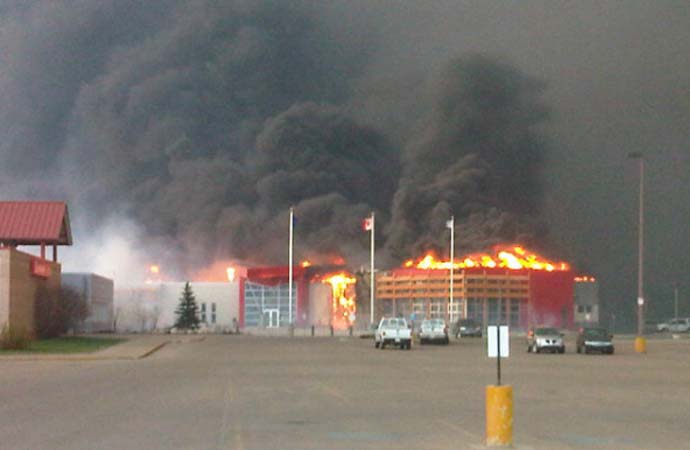 The town hall in Slave Lake goes up in flames during the blaze that caused the community to be evacuated.Photo from www.wildfiretoday.com.

A group of empathetic residents of Fort Smith are banding together to fundraise for the people of Slave Lake, Alberta, the community devastated by a wildfire last weekend.

The group is asking others in Fort Smith to donate household items or money this week, in preparation for a shipment of goods expected to leave the NWT this weekend.

“If we were in the same straights people there would do the same for us,” said Pat Burke, one of the organizers of the collection drive. “It’s also a pride thing. People in Fort Smith have always come through in the crunch.”

Household goods are being collected at Roaring Rapids Hall until May 17 and at the Fort Smith Recreation Center until the shipment leaves on the weekend. Burke said items including blankets, kids clothes, toys, diapers and other household goods would be especially needed.

Money can be donated to the Fort Smith town hall. All money collected by the town will go to the Canadian Red Cross.

Burke said packing supplies would also be needed, so anyone with shipping boxes, packing tape or other supplies are encouraged to drop them off.

As of press time 95 per cent of Slave Lake residents had been evacuated from their homes. Reports said 30 per cent of the community has burned down, including the town hall.

The Edmonton Sun reported that donations have been flooding in from across the province.

Anyone seeking information about family and friends in the Slave Lake area can call the Canadian Red Cross at 1-800-565-4483.