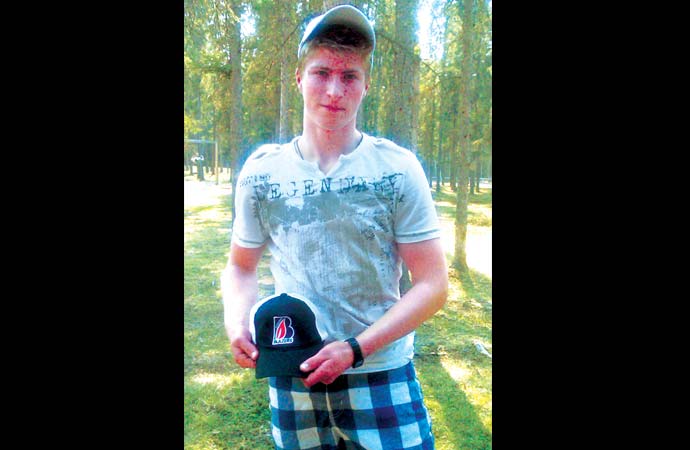 Evan Tordiff was drafted in the 6th round by Kamloops.

For only the second time ever, a hockey player from Fort Smith has been drafted into the WHL.

Evan Tordiff accomplished the feat last weekend, when he was selected by the Kamloops Blazers in the sixth round, 120th overall.

Tordiff grew up playing minor hockey in Fort Smith before heading to Fort Saskatchewan, Alberta to play Bantam AAA hockey last season. He was the only Northerner drafted into the major junior league this season.

“I didn’t have high expectations, so hearing I even got drafted, hearing my name over the telecom, I was pretty excited,” Tordiff told The Journal.

The 15-year-old scored 28 points in 33 games with Fort Saskatchewan, in a year when he also coped with moving south, away from family for the first time, and learning more advanced hockey systems than he was used to in Fort Smith.

He also played as an underage player on the Northwest Territories’ Canada Winter Games team that won a game in the tournament for the first time ever.

“Going down south to play got me a lot more opportunities to get noticed,” Tordiff said of the decision to play in Alberta.

Tordiff is listed at 6’1”, 185 pounds, one of the largest of Kamloops’ 2011 selections. He is still growing, and plans to continue bulking up over the summer.

One of the first instructions he received from coaches in Kamloops after being drafted was to start a standard WHL summer workout regime.

Tordiff said he plans to train all summer in Fort Smith before heading south for skating and conditioning camps in early August.

Tordiff’s first opportunity to get on the ice with his future teammates takes place at the team’s rookie training camp in late August.

The team has its full training camp in early September, before deciding which players to keep for the regular season.

As a 15-year-old, Tordiff is not eligible to suit up for the Blazers for another year. He expects to be back in Fort Saskatchewan after the Kamloops rookie camp, for at least one midget AAA season.

“I just want to get the chance to play in the WHL,” Tordiff said. “I plan to try my hardest to make it.”

“It shows them there is an opportunity for youth from small communities to reach certain heights of hockey,” Evans said. “I think it will inspire them to work hard and practice hard.”

Evans added that Tordiff’s work ethic always stood out for his coaches.

“He’d be doing sprints after practice as everyone else was leaving the ice,” Evans said. “That’s the thing about Evan, he always had the work effort.”

Vincent Kurszewski was previously the only player from Fort Smith drafted into the WHL. Joe “Pinto” Dragon is the only Fort Smith player to make the NHL, although Dragon played university hockey in the USA rather than the WHL.

The Kamloops Blazers are owned in part by a consortium of NHL superstars, including Jarome Iginla of the Calgary Flames, Shane Doan of the Phoenix Coyotes and Mark Recchi of the Boston Bruins. All three played junior hockey in Kamloops.

Although the Blazers missed the WHL playoffs last season, the team is one of the most successful in Canadian junior hockey. Kamloops has won three Memorial Cups and five WHL championships, none since 1994-95.