Leaving a mark on the North 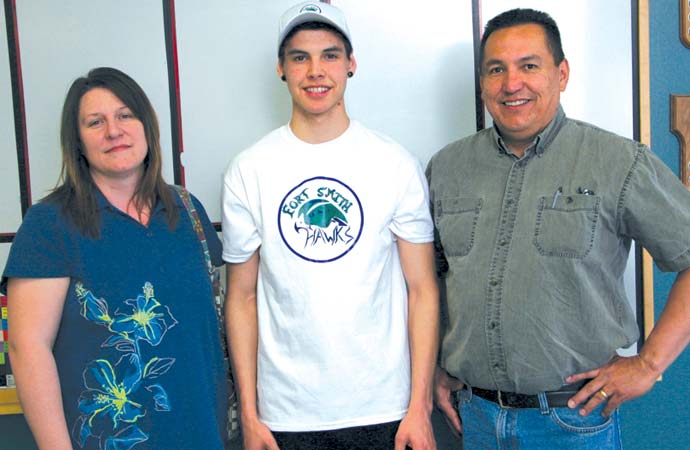 Carson Roche is quickly earning a reputation across the North as the guy to turn to if you need a sports logo designed.

Last week Roche was honoured for his design of the new Fort Smith Hawks minor hockey logo, a contest he won.

The Hawks’ logo can be seen around town on t-shirts and hats that arrived last week.

The logo will be featured on the new minor hockey jerseys – which are Vancouver Canucks blue/green – for next year’s hockey season.

The hockey logo is the third sports logo contest Roche has won in the past year.

Last year, while living in Deline, he designed the Deline Great Bear Lakers logo for the community’s school, which adorned jerseys and was painted as a huge mural on the gymnasium wall.

This year he won the contest for the new PWK Huskies logo that will be installed on the school’s foyer floor, and featured on new jerseys for all sports teams.

He then capped off the three-peat with the Fort Smith Hawks logo, a design Roche said he wanted to be “something different, something tribalish that looks native.”

He earned a free hockey jersey and next year’s hockey registration fees for his efforts with the Hawks.

While Roche is not yet sure where he’ll be next year, if the past year is any indication, his designs will end up on sports team jerseys in his new home before long.