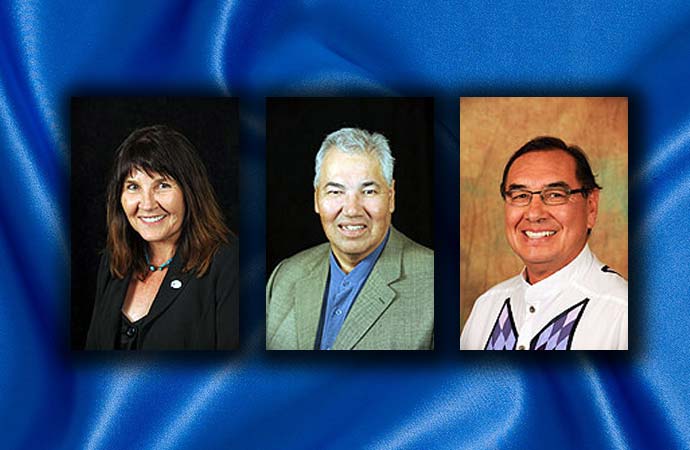 The three TRC commissioners (Marie Wilson, Murray Sinclair and Wilton Littlechild) have been travelling through the North collecting stories from residential school survivors. Littlechild will be in Fort Smith on May 6.

While every Truth and Reconciliation hearing across Canada has been unique, one of the commissioners said each has been a “profoundly spiritual experience” and she expects Fort Smith to be the same when the commission arrives on May 6.

Commissioner Marie Wilson has been travelling across Nunavut and the Northwest Territories, collecting stories from residential school survivors across the North over the past month.

Wilson told The Journal she has seen ordinary gymnasiums and community halls transformed into sacred places by the moving, emotional and often uplifting testimonials of survivors.

“No one can prepare you for what each hearing will be like,” Wilson said. “I compare it to parenthood, or marriage, which both for me turned out to be profoundly spiritual experiences. People are digging so deep into the memories of their hearts, that it creates a sacred environment.”

“Something shifts in the room that brings people to a different place than where they were when they walked in,” she said.

Wilson and her fellow commissioners, Murray Sinclair and Wilton Littlechild, have held hearings in Yellowknife, Fort Providence and Fort Resolution so far during their NWT tour.

Littlechild will be at the Fort Smith Recreation Center from 10 a.m. to 10 p.m. on May 6, as Wilson said she regretfully has another engagement. Anyone who is ready to talk about their residential school experience is invited to do so, either in public or in a private room on that day.

The stories and other materials from the hearing will be collected for the future National Research Center, a place yet to be determined where all of the residential school collection will be available and accessible for future generations.

“This will be a permanent collection, so we can never again say as Canadians we didn’t know,” Wilson said.

Everyone from the community is invited to the hearing. Wilson noted two things that struck her from previous hearings – inevitably someone who just came to listen was inspired to speak of his or her own residential school experience, and non-Aboriginal people and young people who didn’t attend the schools left the hearing with a much better understanding of the experience.

“It isn’t all negative,” she said. “Many people are able to talk about the positives; from the friendships and allegiances the children became like surrogate families for each other.”

Wilson recently finished the Nunavut Truth and Reconciliation tour. She said that in the eastern Arctic, one difference is the age of people talking about their experiences – in Nunavut there are many parents still alive who remember their children being taken away to the schools.

But she said in both the eastern and western Arctic there has been a realization that the suffering endured by indigenous people in the North has parallels in indigenous societies around the world affected by colonization.

“There is a notion that the North is part of the wider Canada, and Canada is part of a wider international indigenous society who suffered all sorts of displacement,” Wilson said.

Wilson, who lives in Yellowknife and spent 25 years as a journalist with CBC, said being a part of the commission is a “tremendous honour.”

“People are sharing from the depths of their hearts,” she said. “It is a sacred trust, and a very humbling experience to see the courage it takes to talk about some extremely difficult hardships in a generous and respectful way.”