Life of adventures for a 96 year-old crib master 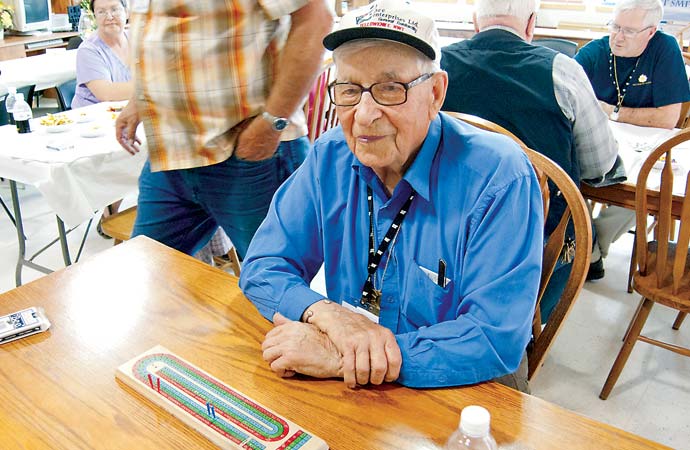 Mike Krutko was the oldest participant at this year’s Seniors Games. The nimble 96 year-old won gold in team cribbage.Photo by Chris Higgins

Ninety six year-old Mike Krutko of Yellowknife plays cribbage with the kind of vigour that has marked his long and adventurous life.

Before hitting the tables for a solo tournament in the Seniors’ Games in Fort Smith last weekend, he remarked on what it’s like to have such a full and active life.

“It feels boney,” Krutko said. “My bones rattle. I still work in the garden, but I don’t walk as much as I used to.”

Krutko has lived many different lives, and he has written about them in a book called Mike Krutko’s Amazing Adventures – from his early years riding boxcars across the Canadian prairies in search of a meal and work during the troubled times of the 1930s, to his days of trapping in the Yukon. The cover photo shows him in a fur cap and parka and sporting finely decorated leather boots.

During those days of running a trap line, Krutko says it was normal for him to walk 18 miles in a single day.

His book’s back cover shows him in a red plaid shirt leaning on the wing of a small plane with the same wide grin that punctuates his sentences still. The kind of championship spirit that infuses his crib playing drove him to Edmonton to get his private pilot’s license. After passing the exam, he bought a used plane, fitted it with skis and then flew it along with his wife Effie and their newborn child back home to Fort McPherson.

During his later years, Krutko fathered eight children, including David Krutko, the current MLA for the Mackenzie Delta. He ran a general store in Fort McPherson for over forty years and became a successful road contractor crushing gravel for the Dempster Highway and maintaining ice roads across the North.

With 20 grandchildren and a lifetime of adventures under his belt, Krutko grasped his cane and shot a glance at his next cribbage opponent while he mused about life as a senior’s senior.
Asked if he misses his former life in the bush, Krutko’s reply was unqualified.

“I don’t miss anything,” he said. “I know that people get old and I kind of go with that. We have to come and go that’s how we’re made. Life has been good to me.”

As for his cribbage game, Krutko remarked modestly on his skills as a player.

“I like playing because it isn’t a slow game,” he said. “It’s mostly luck. I’ve played off and on for years. It’s a bit of a habit I guess.”

Krutko and his partner won in the team event in Sunday’s finals, but he did not end up with a medal in the final solo event. The cards that round did not go his way.