Paddlefest flowing faster than ever 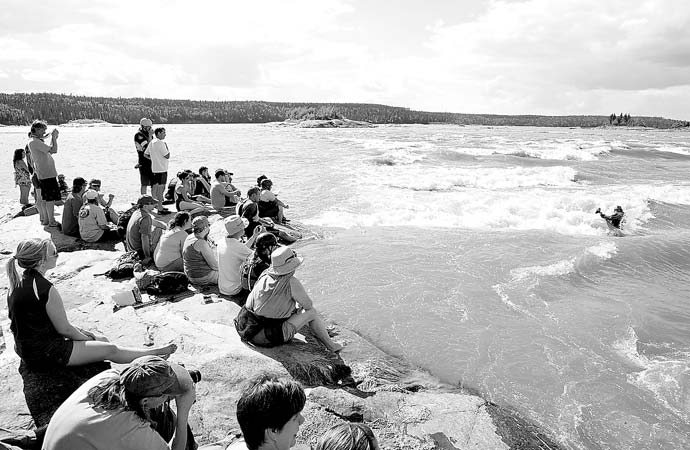 For those who worship the waters of the Slave River, Paddlefest is an annual mecca where they can meet and greet other white-water enthusiasts and show off their skills to crowds lining the banks.

“For paddlers, the river is like Shangri La,” said organizer John Blythe. “The whole thing is an event to get paddlers out celebrating the river.”

Born out of the convergence of several paddling groups in Fort Smith in the 1990s that ultimately led to the town hosting the 1994 National Whitewater Race Championship, what is now recognized as Paddlefest fell on hard times as the millennium drew to a close.

All of that changed when plans were proposed to dam the river in order to provide more power to northern Alberta.

“It all stemmed from the Slave River hydro threat,” said Blythe. “We based it on getting people excited about the river.”

The event has grown from one weekend a year, to its current week-long format. This year Paddlefest takes place from July 29 to August 1 but activities and workshops take place all week.

“It was originally intended to draw people in,” said organizer Kirsten Bradley. “But it has become a community event, a community festival.”

Without significant paddling tourism, Paddlefest is essential to promote what Bradley calls, “one of the best paddling rivers in the world.”

“We’re holding kayak and canoe clinics for all ages, a big air competition and races,” said Blythe. “We’re also expecting an even larger flotilla than we had last year, which is awesome.”

Blythe and the Paddlefest organizers plan on utilizing every inch of the 20 km of rapids originating in Fort Fitzgerald and ending in Fort Smith.

Smith’s Landing First Nation will be holding a hand games competition during the festival, which includes a feast.

“It’s great because between the drops there are calmer sections of water,” said Blythe. “It allows us to offer something  for all different skill sets.”

“We had people coming down from Yellowknife and Fort Simpson last year,” Blythe said. “This year we’re expecting even more and we’re doing everything we can to make getting here as easy as possible.”

“We know of a contingent of paddlers coming down from Yellowknife,” Bradley said. “A Calgary paddling store is driving up with a 15-person van.”

Some people plan years ahead to attend Paddlefest, especially professional paddlers from around the globe because of the distance involved, Bradley told The Journal.

“It’s an amazing time and Mountain Rapids is a beautiful place to spend the day,” Bradley said. “You’ll find a lot of friends there, and watching the professional paddlers is exciting.”

The river is currently flowing fast at a reported 4,500 cubic metres per second, which according to Blythe, should make things more fun.