Sachs Harbour: a modern community connected to the land 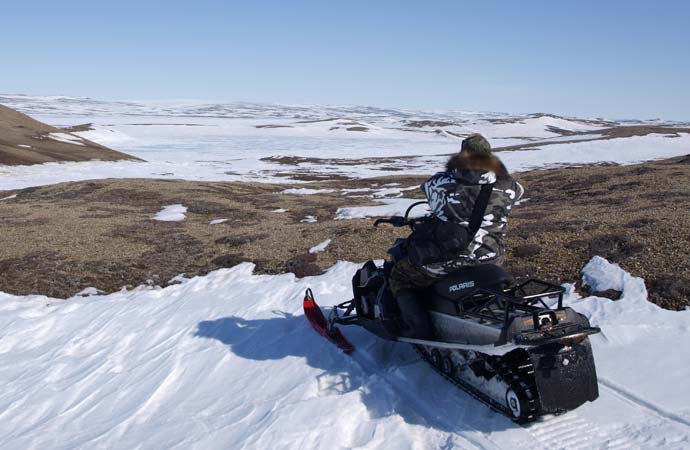 Larry Carpenter (above), like the rest of his community, lives in Sachs Harbour but spends considerable time on the land all around Banks Island. Carpenter showed Adam Bathe much of the land he uses all across the island.Photos by Adam Bathe

After five weeks in the NWT’s northernmost community, Aurora College instructor Adam Bathe said he was amazed by the people of Sachs Harbour’s use of the entire island they call home and how interconnected the community remains with the land.

Bathe travelled to the Inuvialuit community to teach an environmental monitoring course, but spent as much time learning as teaching. He was fortunate enough to billet with a family of hunters and fishermen who regularly get out onto the land. He spent time in an Arctic char fishing camp, and participated in the community’s annual spring geese hunt during his stay.

Those experiences gave Bathe a chance to see Sachs Harbour like the people who live there see it – as a small hub for the entire Banks Island environment that is fully used by the community.

“Everybody knows the story and the history of the whole island,” Bathe said. “The town of Sachs Harbour is kind of a node in this huge web. Every square inch of the island has somebody who has a relationship to it, who recognizes it as a home, who places value on it. On a map the island looks empty, but when you actually see how people travel and use the land, you see there are no barren lands.”

Bathe cited the example of Aulavik National Park, Canada’s most northern park, which in Inuvialuktun means “where people go.” On a map, Aulavik looks to be a long way from Sachs Harbour, across the entire length of Banks Island. Yet as everyone in the community knows, the name is fitting, for Aulavik has always been a place where people go. 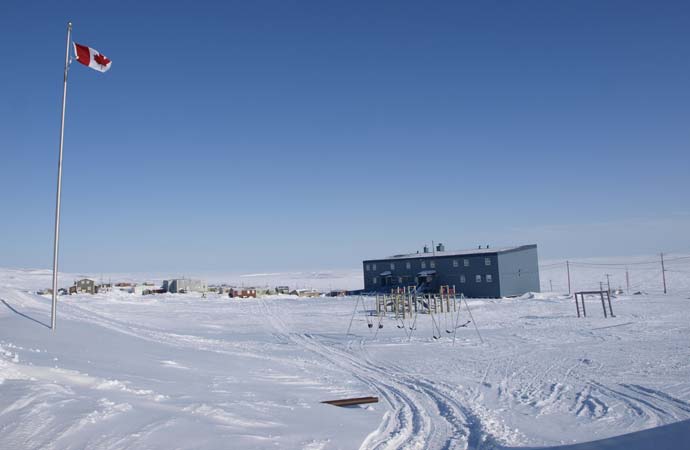 Left, the town of Sachs Harbour sits on the banks of the Beaufort Sea. The blue building is the health center, while the rest of the community winds along the harbour.

The people’s connection to the land plays a large part in its connection to traditional ways of living. Most of the food eaten in Sachs Harbour is local – Bathe estimates that 90 per cent of the meals were fresh char, muskox or geese – and hunting and fishing still serve as employment for many of the 120 people living in the community.

Even the elementary school embraces tradition. When geese arrived from the south the school shut down so children could accompany the rest of the community on the spring hunt.

Meanwhile, Bathe said the people of Sachs Harbour have also embraced education, both traditional and Western. He said he was surprised at how well-read the community is, with nearly everyone knowing the entire history of Banks Island from both the stories of elders and all of the books that European explorers have written about the place over the years.

“They know their own history, inside and out,” he said.

The community is not without its challenges, however. Children have to go to far-away Inuvik to finish their education after grade six, which often results in entire families moving to the mainland to help children get through their difficult teenage years. Employment outside of traditional hunting and fishing is scarce, with only a handful of government jobs to go around. The rapidly warming Arctic is challenging much of the traditional knowledge that people hold, as ice thins and polar bears – a staple of the hunting economy – continue to be threatened. And the traditional language, Inuvialuktun, is gradually slipping away as nearly everyone embraces English.

But Bathe said that of the many communities in the NWT he has spent time in, Sachs Harbour was one of the most positive.

“It seemed there was something really special about Sachs, that I can’t quite put my finger on,” he said. “There is a sense that people are happy, that something is being done right there. I just really enjoyed being a part of it.”