Bang the drum for good 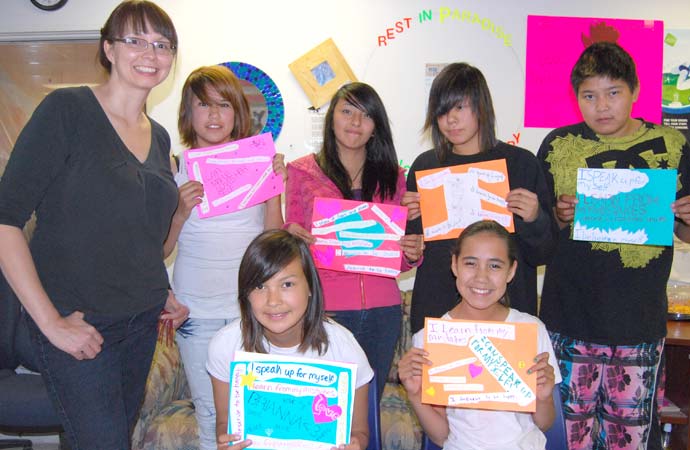 Veronica Johnny and participants in her self-esteem workshops at Uncle Gabe’s Friendship Centre with their self-affirmation posters. Photo by Chris Higgins.

Veronica Johnny, who ran the workshops, says hand drumming played an important role in the sessions that were designed to help instill participants with confidence and a stronger sense of cultural pride.

“The more somebody drums, the better their self-esteem is going to be,” Johnny said. “It has such a powerfully healing sound that it can’t help but make you feel something positive and that’s what a lot of people need these days.”

Johnny, a working musician from Fort Smith presently living in Ontario, has run similar workshops for youth in schools in Toronto and the territories. A hand drummer for four years, Johnny says that although some Aboriginal people may feel using the drum outside of sacred ceremonies is wrong, she believes using the instrument to improve the lives of youth is in keeping with traditional beliefs.

“As long as you treat the drum with respect and your intention is for good, then I want to put drums in everybody’s hands,” she said. “It’s very healing for the earth because when we play the drum we think about the goodness that the earth gives us.”

Funded by the territorial government and open to all youth, including non-aboriginals, the workshops also used techniques such as positive messaging and affirmation to give kids the tools to boost their confidence and pursue their dreams. One exercise youth participated in was to make their own posters with a positive message that had relevance for them. Johnny said that by hanging the posters in a highly visible place in their homes and reading them every day, the messages become part of their psyche.

Johnny says another concern among youth is they worry too much. To help them reduce anxiety, she encourages them to use positive messaging.

“The only things you have control over are your thoughts, words and actions, and how well you take care of yourself to stop the negative messages in your head,” she added.