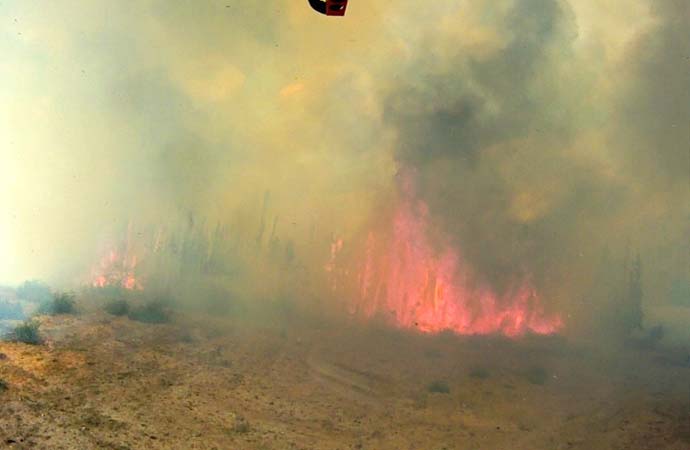 Getting a close up view of fires is always hazardous, especially if they are threatening a community. To make good decisions on how to fight a fire, good ‘intel’ is needed. What better way than an unmanned, robotic mini helicopter with a mounted video camera capable of close up aerial views - like this one taken by ARDi?Photo courtesy of Western Willow Ventures Inc.

In 2003, a wildfire ravaged Kelowna in B.C.’s Okanangan Valley, destroying 239 homes and over 25,000 hectares of pine forest surrounding the community. In spite of the horrendous property damage no lives were lost, but over 45,000 people were evacuated.

In those situations, communicating information to the public can make the difference between lives saved and lost, Kelowna city manager, Ron Mattiussi, told The Journal. He directed Kelowna’s emergency operations during the 2003 fire and says they chose not to use the conventional approach of informing the public on a need-to-know basis.

“We made it a standard policy of the Emergency Operations Command (EOC) that within 15 minutes of a decision being made we would announce it,” Mattiussi said. “For example, when we decided on an evacuation plan the minute it was approved it was made available to the media.”

In Kelowna, Mattiussi says the EOC kept a tight partnership between decision-makers in the crisis and their communications people. It`s important to ensure that accurate information is communicated to the public, but if that important message fails to reach the public, lives or property can be put at unnecessary risk. For that reason, EOC discussions included communications personnel so they could clearly understand the context of decisions made by the EOC.

Mattiussi’s thinking throughout the wildfire crisis was to use whatever media tools they could get their hands on, from newspapers to television, radio and the internet. What helped most, he says, was a community website where all the latest information could be posted.

In future, they plan to use Twitter as their main communications tool because of its capacity to get the most current information out to the public quickly.

“A map posted on the internet with evacuation notices was so much more effective at communicating information than printing the words in a written notice,” he said. “A picture is worth a thousand words. Everything we did was focused on getting information into the hands of the media and letting them get the word out.”

In any emergency situation, communications demands hit an EOC on many fronts. Mattiussi says the website made a huge difference in keeping a steady flow of information accessible, but their phone lines were quickly overwhelmed. People, he says, sometimes just want a human voice to reassure them about the situation or confirm the last bulletin. A call centre handled by volunteers prevented Kelowna`s EOC from being distracted from fighting the fire itself.

Finally, communications people need to be able to deal with the possibility of being flooded with requests for interviews and information from not only regional media outlets, but also national and international news teams. Daily briefings with members of the EOC helped Mattiussi make the most efficient use of their time with external media.

During the fires technology helped them immensely, but Mattiussi said ultimately there is no substitute for people just looking after their own friends and family.

“In the end, you can’t control Mother Nature,” Mattiussi said. “These are wind-driven events. Dealing effectively with the situation is a combination of a town and its neighbours getting together. You may not have internet but you have neighbours.”

A request by the Slave River Journal to have the Fort Smith fire briefing meetings open to the public was denied. Mayor Janie Hobart brought the request to the meeting but it was vetoed.

One of the members of the command group attending the meeting said there was concern that having the media there “might lead to panic.”

A current message from those daily meetings was available on the town`s website and through its new phone hotline. Senior Administrative Officer Brenda Black says they also intend to establish Facebook and Twitter accounts to keep people informed.

Aside from the mayor, who Black says is normally spokesperson during emergencies in Fort Smith, they have yet to appoint another person as a dedicated communications officer.

“That’s one of the things we need to do,” Black said. “If things progressed beyond where we are now and we`re in an evacuation situation we would have a communications office set up at the recreation centre,” she said. “That’s where everybody would go and we would have as many phones as needed. We can dedicate all our phone lines if necessary.”