Kids getting their kicks 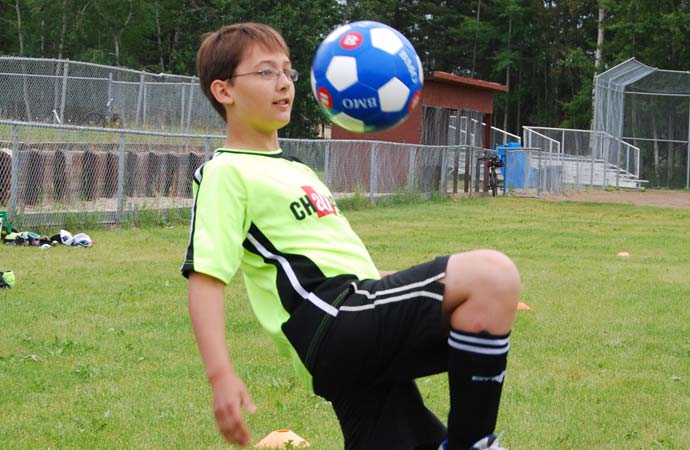 Soccer players had an opportunity to sharpen their skills and learn some new tricks during a soccer camp at Harry Sudom Park in Fort Smith last week.

Three professional soccer coaches from England were in town to run the week long camp which attracted over 80 participants from 3 to 18 years of age. Michael Wheeler, one of the visiting instructors, says they focused on teaching players the basics and making sure the kids had fun.

The coaches live in northern England and work for Challenger Sports, an American company based in Kansas that has run soccer camps for over 20 years across North America. This is Challenger’s first time hosting camps in the Northwest Territories.

Wheeler, who has coached youths for the last four years and plays semi-pro soccer in England, says players learned essential skills such as how to strike and defend the ball properly, passing, getting space and being open for a pass. For the youngest participants, it was kept simple – teaching them how to kick a ball and not to use their hands. Players also had the chance to apply their new skills in daily World Cup style matches in which teams were given points for winning matches as well as for showing good sportsmanship on the field.

Fort Smith’s director of community services Tommy Phillips says he hired Challenger to teach the workshops because “there is a greater demand for soccer than we’re capable of doing right now”. With the new soccer field being built in Fort Smith, he plans to organize an after school soccer program and a soccer club that will provide opportunities for players of all ages to get involved in the game.

“Those [coaches] are just planting the seeds and the camp gave us an opportunity to see what’s out there,” Phillips said. “Obviously, now there is an indication that there is an audience that we can target and start to build up on it.”

Before heading off to Hay River and Yellowknife to run soccer camps, Wheeler plans to see some more of Fort Smith with a visit to the Salt Plains and a rafting trip on the Slave River.

“The bugs are starting to annoy us, but it’s been great to see so much of Canada,” he said.