Smiles and sorrow at TRC in Inuvik 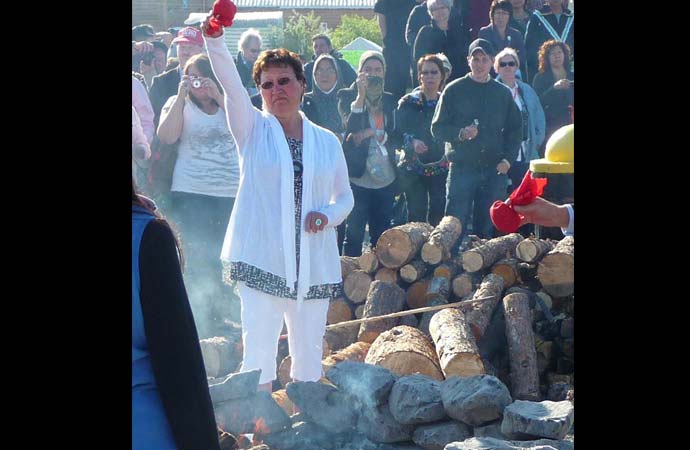 Pauline Gordon placing the ashes from the first National Event in Winnipeg, into the Sacred Fire in Inuvik.Photo courtesy of Pauline Gordon.

Emotions ranged from sorrow to joy for former residential school students gathered in Inuvik for a second national meeting of the Truth and Reconciliation Commission from June 28 to July 1.

Up to a thousand participants shared their experiences of abuse while attending residential schools across the North.

Former NWT assistant deputy minister responsible for education and culture Pauline Gordon of Fort Smith was invited to Inuvik as a member of the Circle of Resilience, an honoured group selected for their ability to overcome the residential school experience and accomplish something with their lives. Gordon, who also acted as a moderator, says the commission encouraged people who have suffered to open up about their experiences. For many it was for the first time.

“It’s a start to opening up the dialogue about residential schools,” Gordon said. “Previously so many of us numbed out the experience by becoming workaholics like myself or alcoholics like the rest. We created a block to the memories and lived with the horror in our own little world.”

Headed by Manitoba Justice Murray Sinclair, Marie Wilson and Wilton Littlechild, The Truth and Reconciliation Commission is documenting the stories of residential school survivors for the purpose of writing an historical record of how the residential school system has impacted Canada’s Aboriginal people.

Gordon, who spent a decade in residential schools in Inuvik and Fort Smith, says acting as moderator at the sessions was “extremely difficult because I was triggered by so many of the stories and yet I had to maintain a face”. Participants were given the option of speaking in a large forum such as the Circle of Resilience which consists of ten people, smaller gatherings or in a private one- on-one “statement gathering”.

In addition to sharing their stories, attendees were also entertained with dancing demonstrations and a talent show. Gordon says she felt many of the participants benefited from having an opportunity to honestly express their emotions, something that was strongly suppressed during their years at the residential schools.

Although many Aboriginal people suffered directly from the experience of being forced to leave their families and live in a strange place where they were told to deny their culture, Gordon says many others have been impacted inter-generationally. At the gathering in Inuvik, Gordon also heard stories from sons and daughters of those who struggled with the emotional or psychological effects of living in the residential school system often suffered as a result in their own lives.

“Institutions across Canada are a strong reflection of the impact with high incarceration rates,” she said. “Lots of people [in Inuvik] were talking about spending time in jail, lots of people talking about addiction and recovery. So many of our people are still on the streets because of their participation in the residential schools or an inter-generational effect because so many of us didn’t know how to parent.”

One common sentiment Gordon encountered from participants at the Inuvik event focused on blaming the churches and the educational system for problems in their lives. Though she does not defend those institutions, Gordon believes laying blame is not the answer for residential school survivors who want to heal.

“For some its a long journey and for others its a shorter one because they may have already started their own healing process,” Gordon said. “But definitely the Truth and Reconciliation Commission is not the end all and be all of our sorrows and the things we need to do. It’s all personal and everybody says it’s the government [that has to do something], but I say its personal and most people that require assistance should seek it from whatever institution or whatever mechanism that’s around them to ensure that they get some help.”