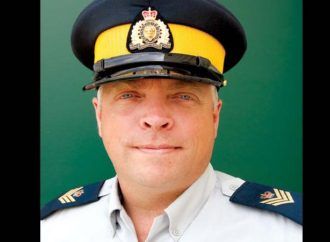 When a community is threatened by wildfire and lives are at risk, portions of a town or even the whole community may have to escape en masse.

The moment an evacuation is ordered people naturally worry at the implications of leaving their homes to fate and the whims of a wildfire out of control, at risk and unguarded when the town is empty. In those situations, one of the great challenges for the police charged with enforcing an evacuation is dealing with those individuals who refuse to leave.

When an evacuation takes effect, police officers are responsible for ensuring that citizens are complying. Fort Smith’s RCMP detachment commander Sgt. Kevin Platford said that if somebody refuses, there is only so much an officer can do.

“Emergency measures allow us to enter a residence to determine that someone is inside and if we determine that they are of sound mind and don’t want to leave that residence, there’s no power preventing them from doing so.”

If a fire approaches close to town and an evacuation is ordered, police check house-to-house to make sure everyone has left their property. If someone refuses, they just move on. Lingering with one individual puts others at risk. The most RCMP officers can do for that person beyond a frank and persuasive conversation is take their names, contact information and an address where they may go if they have to retreat from the fire after the town has left.

When children under 18 are involved, however, Platford told The Journal that if there is a possibility that children could be in harm’s way by their parent’s refusal to leave, police may take action to “forcibly remove them to ensure their safety.”

In an evacuation situation, Platford expects the majority of people will cooperate. To do otherwise puts other lives in jeopardy by distracting emergency responders or slowing the evacuation process. One example he cites is the individual who disregards orders to keep to a single lane and decides to pass a convoy of cars during a road evacuation. That selfish action could tempt others to follow suit which could block emergency vehicles from attending to a fire or an injured person.

“What everybody has to understand is we’re all working together to protect the community,” Platford said. In an evacuation, people need to listen and cooperate, he added.

“Let’s work to make [an evacuation] happen if you’re given direction that is safe and sound. That’s what we’re looking for, that kind of agreement as a community to make sure we are all safe.”

As enforcers of emergency measures, RCMP officers may also have to deal with someone whose home must be demolished to prevent the spread of a wildfire into the community. It’s a difficult situation, but Platford said people have to step back and realize what’s really important in their lives.

“We as police officers are here to preserve lives and protect property, but we’re also members of this community,” he said. “I would be going through the same pains about property. If I lost that it would be difficult, but as long as we can walk away, we’re still able to rebuild afterward.”

“Property is there, but life is more important at the end.”