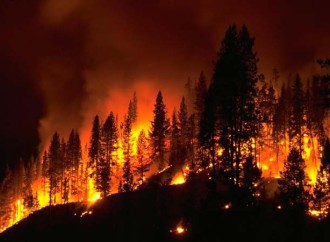 Summer is almost over. How did it go by so fast?! It all seems surreal, as we look back on the intense events that unfolded.

The hot dry weather in June and July was wonderful when everyone in the south was enduring wet and cold. Then the fires hit Slave Lake and people got paranoid. The monster fire, as big as some countries, threatened oilsands plants around Fort McKay and then headed north for Fort Chipewyan. It refused to die, spreading to the east to consume hundreds of thousands of hectares, as the threat of fire marched inexorably northward.

Fort Smith was already anxious when a lightning fire started about 40 km to the north. The community went on the highest level of alert. Things got so exciting CBC national radio reported that evacuation was imminent. People were showing up at the recreation centre with suitcases packed. And then the rains came.

In the end, we enjoyed a wonderful summer (with few bugs!). But we did have a close call with extreme fire conditions for a short time. Now is the time to assess and learn from that. Was that situation handled right?

Did Fort Chipewyan and Fort Smith have proper evacuation strategies? Did Fort Smith over-react? Will all that be assessed, with lessons learned?

There were many things that could have been done better, and 20/20 hindsight is very valuable to ascertain what. The Slave River Journal tried to stimulate that process by providing interviews with various decision-makers during and after it all. Unfortunately, in our interview with her, Fort Smith Mayor Janie Hobart called that “fear mongering.”

Let’s consider the context first. Fort Chipewyan and Fort Smith both are protected by some of the most sophisticated firefighting capabilities on the planet. Because of the proximity of the three jurisdictions, we have an unusually high level of resources to protect our communities. Alberta, the NWT and Wood Buffalo National Park each have some of the world’s best firefighters and experienced decision-makers. Add to that the presence of the Territorial Fire Centre in Fort Smith with its considerable expertise. It doesn’t get any better.

Well it does, actually, if you consider that police in the communities are very involved and capable, as are community volunteer firefighters. The depth of available expertise and resources is significant. Collaboration between agencies is excellent. Even without any organization, we were in very good shape.

Having said that, aspects of community evacuation planning and preparation must be improved. In particular, better communication with the public is needed in Fort Smith.

As with any large building, evacuation scenarios for communities should be planned, mapped and explained in advance. Please, do not invoke an expensive consultant to do this! Only common sense is needed. People are not stupid. This can and should be figured out at public meetings. Involving the people in determining solutions is key.

Let’s look at what not to do. The Fort Smith plan would have had roughly 2,000 people rally downtown and then drive in a long, orderly line to Peace Point to await some barges and little boats from Fort Chipewyan to haul people back there. Is that realistic? No, it is not.

How long would that take – days, maybe weeks? Are there even barges available? What of the high water on the Peace River that would make accessing boats hazardous and possibly prevent barges from docking? What would the people eat while they waited? Where would they get water? What of shelter, would they sleep in their cars, for days?

When Hurricane Katrina hit New Orleans, thousands of people were sent to the football stadium for refuge. They ran out of water in three days and were stuck there for more than five. It was not good. When Slave Lake burned, people were not allowed back into town for weeks.

Plan for the worst and hope for the best – always

Fort Smith residents should have been given an outline of what was planned. They should have been engaged in the decision-making process. Instead, the meetings were closed. That was wrong. What was there to hide?

Common sense says people should have known the plan and been given an outline of a kit – preparation to be as self-sufficient as possible, with tents for shelter, food that will not spoil and a supply of water. Instead, the communication in leaflets from town hall urged people over and over to “water their lawns.”

The lack of a warning system was a concern. Re-activating old sirens from the ‘50s was discussed. The Town of Fort Smith website (which gets very little use) was to have messages posted and social media like Facebook and Twitter was to be invoked. But those things take time, and there was no time. Meanwhile, the Slave River Journal gets thousands of hits on its website each week, plus it has a Facebook account with over 1,000 “friends” along with a team of professional communicators that were available. We would have been happy to offer our services. But we were shut out of all proceedings.

In the various Slave River Journal articles and interviews on all this, we think the wisest advice came from Kelowna city manager, Ron Mattiussi, who was in charge of defending his city when  fires ravaged it in 2003.

He said, you can prepare all you want but, “When it comes down to it, it is often just you and your neighbours and you have to depend on each other for survival.” Obviously, when things get that bad, as must have happened in Slave Lake, the more prepared everyone is and the more citizens have been involved, the better chance of survival people will have.