Fort Smith, the little town in the Northern bush 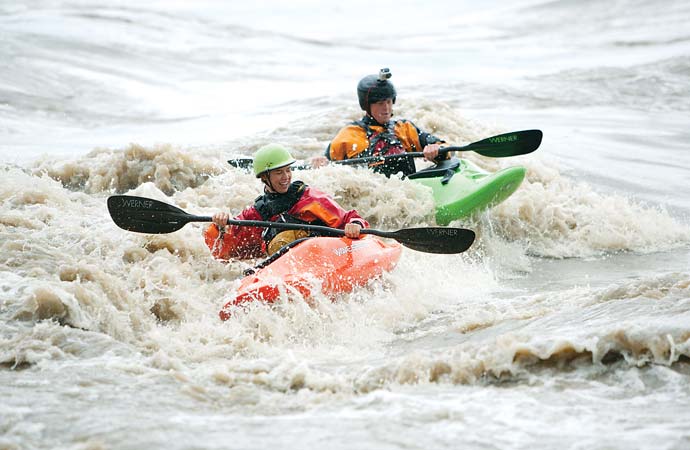 Paddlers surf the hole at Mountain Rapids outside of Fort Smith during the fourth annual Paddlefest, showing off their kayaking prowess while braving the Slave River’s strong currents. Paddlers young and old spent the long weekend playing on the river, competing in various friendly competitions of skill.Photo by Paul Bannister.

“It was an awesome weekend, the best Paddlefest so far,” said organizer Kirsten Bradley.

This year’s event saw paddlers come in larger numbers from farther distances to enjoy the event and play in the Slave River rapids over the holiday weekend.

“We have a huge contingent from Yellowknife, 25 at least,” said Bradley. “We had people from Fort Simpson, Calgary, B.C., Colorado and Michigan.”

Higher water levels and periodic rain made the event less spectator-friendly, but many still hiked and waded their way to the place local paddlers lovingly call The Playground at Mountain Rapids, site of most of the activities, to watch the competitors do what they do best.

“We saw a lot more advanced paddlers this year,” said Bradley. “They were a really friendly group and we had a lot of fun.”

Activities were kicked off with the flotilla and war canoe race Friday morning.

Both were flat water events involving paddling down the Slave River from Hay Camp in Wood Buffalo National Park to Fitzgerald.

This year, there was a shortened version of the flotilla starting at the halfway point and most flotilla paddlers took advantage of that, enjoying a leisurely sojourn down a picturesque part of the river for several hours.

Smith’s Landing First Nation, Wood Buffalo National Park and the Fort Smith Paddling Club were partners in the organization of that day’s events.

Each had a team in the featured war canoe race.

The winner this year was the paddling club, managing to wrest the honours and the coveted paddling trophy from the hands of the Smith’s Landing team, who finished only minutes behind.

“We felt it a good idea to be charitable,” quipped SLFN Chief Cheyeanne Paulette during the trophy presentation ceremony.

The day was concluded with an outdoor feast at Fitzgerald, hosted by SLFN.

Saturday was the day for whitewater events.

It kicked off with a Feeding the Fire ceremony where Francois Paulette, assisted by SLFN members and drummers, blessed the event and all who traveled to it in a traditional Dene way.

It was a special, inspiring and heartfelt moment when paddlers were reminded of the spiritual connection all people have to the river, and to appreciate how meaningful that is.

Following that, people proceeded to the rapids and events commenced.

The feature event Saturday afternoon was the advanced paddler throw-down, where the best paddlers played in a whitewater “hole” right off the rocks in full view of spectators.

Called rodeo or free-style, the paddlers got two chances to show off their skills and do a variety of tricks, with judges scoring each performance.

The winner this year was defending champion Leif Anderson from Fort Collins, Colorado, who once again wowed with some amazing aquabatics.

There were a variety of kayak events for all skill levels as well as canoe surfing and rescue, an event involving teams of kayakers battling one another while pushing large inflated balls around on the rapids, and some hi-jinx events such as surfing the hole with an inflatable toy and a swimming race through the rapids.

This year’s newest addition, the tandem kayak, was a huge success, according to Bradley. People paid to have a professional paddler take them out into the rapids and show them the finer points of getting wet in the Slave.

“The people who took a ride said it was awesome,” she said. “One person told me that it was way better than whitewater rafting.”

The profit (at $15 a ride) from the tandem tours will be donated to the Fort Smith Food Bank.

Even though the imminent threat of damming the Slave has now seemingly passed, the prospect is never far from Bradley’s mind.

“We have to keep using and appreciating the river because the power companies are not going away forever,” she said. “The rapids are one of the defining features of Fort Smith, so let’s continue to celebrate them every year.”

The day was capped off with a barbecue and party at Queen Elizabeth park where prizes and awards were given out.