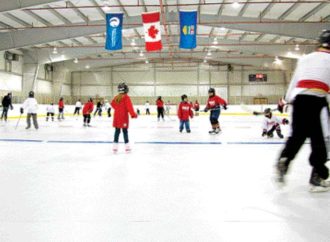 The artificial ice surface in Fort Chipewyan enables the community to have access to recreational facilities all year long.

Finishing touches are being put on the artificial ice surface in Fort Chipewyan’s Archie Simpson Arena, the latest in a series of steps to ensure the town and its people have access to the best rec facilities available.

Ten months after the first stages of construction were completed, the $590,000 project is days away from the ceremonial christening of skate blades, something that Municipality of Wood Buffalo Councillor David Blair feels is essential.

“It is important for the community,” he said. “They are washing the new ice surface all over, cleaning it out and then sealing it, and I have been told that the surface has been certified as safe and usable and hopefully that is the end of it. That is good news.”

The installation has been a bumpy road for Blair, contractors and the people of Fort Chipewyan.

“There have been a lot of issues with expansion and contraction,” he said. “This is the largest surface anywhere and that is why I had my concerns of, is this the place to put it and to have a test done.”

Installation of the “Superglide” surface has turned eyes toward the tiny northern town, all looking to see if the world’s largest artificial surface turns out to be a hat trick or a cross check.

“We’re just waiting to see how it pans out,” said Blair. “We have no road in or out so we have no way of dealing with any issues at this point, so it has been a problem for me personally. I want to see successes here, not failures.”

According to Blair, engineers are still looking into other options for the surface’s base layer, one providing stability while accommodating for expansion and contraction.

The town opted for the artificial surface after attempting to extend its normal three-month playing season into the fall and spring, but a look into the stomach-churning $2 million cost of large-capacity refrigeration systems led them in a more cost-effective direction.

Also on the books for the arena is a new aquatic centre, another step Blair feels is essential in providing the people of Fort Chipewyan with the recreation services they deserve.

“We are taking steps to start working on the development of the aquatic centre which will go into the back of the arena,” he said. “We want to take advantage of the contractors being here. You understand how we are situated, and we have to use our resources responsibly.”

“It’s a really exciting time for us to look forward to,” said Blair.