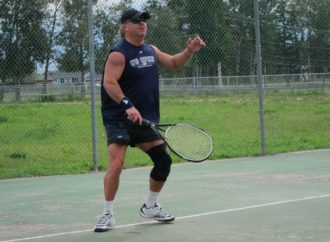 Despite recently overcoming an injury, Yellowknife’s Bernie Bennett won the single men’s competition at the Territorial Tennis Championships in Fort Smith over the weekend, beating out fellow Yellowknifer Jim Umpherson with a score of 6-3, 6-3.

“He’s coming off a very serious injury,” said Sebert. “But he still won, which shows there’s a gap between him and us.”

Sebert said the weekend, which saw a total of 10 participants play in Smith, was very successful.

“There were very competitive matches and some new players,” he said.

In one of the longest matches in the tournament’s history, Dennis Bevington and Jim Umpherson battled for the final spot against Bennett for three hours on Saturday evening, with Umpherson finally winning. The score was 4-6, 7-5, 7-5.

Sebert and Umpherson, both in their sixties, won the doubles competition.

“They beat out the youngsters,” remarked player Richard Daitch.

Daitch won the consolation prize for the men’s singles with a 6-2, 7-6 score.

No women competed in this year’s tournament.

The championships took place in the midst of repairs to the court, but neither that nor the weather slowed any of the games down.

“In 25 years we’ve never been rained out,” said Sebert. “I guess that’s the benefit of living in a dry climate.”

The Territorial Championships is the final tournament of the year in the NWT following the Fort Smith Open and the Yellowknife Open.