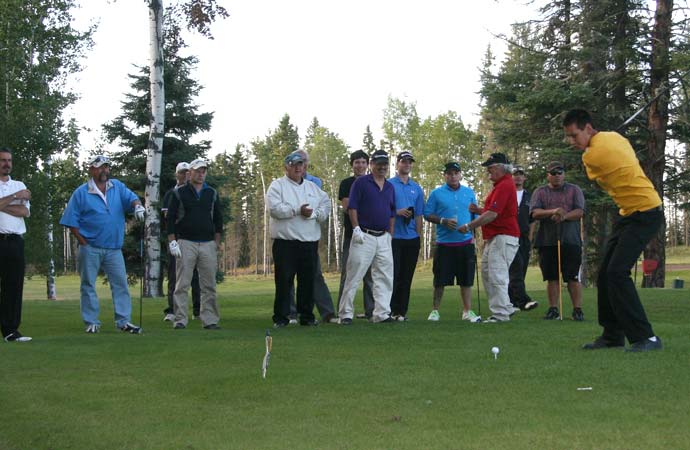 The “Horse Race” is a fun golfing event that includes heckling by fellow golfers as you try to focus on driving the ball. Junior champion Brandon Walterhouse tees off.Photo: Don Jaque.

Unlike the other two golf tournaments hosted by the Pelican Rapids Golf Club (PRGC) each summer, the end-of-summer club championships is mostly for local golfers, and is mostly about bragging rights.

The final tournament at Alberta’s northern-most golf course drew only 35 participants, but they enjoyed good times, great weather and a golf course in the best shape it has been in all summer.

Notable at the event was the opening of the new green on hole number two, to add even more challenge to the tricky nine hole golf course. The new green had been fenced off most of the summer waiting for the fairway grass to mature and was finally opened Thursday night in time for the tournament.

That means the par score for the second hole, with the green now about 140 metres further away from the tee box, will be raised from four to five. The first hole, which already challenges many as a par five, will drop to a par four.

In a game that is at times as difficult as it is addictive, things just got a little tougher for those in Fort Smith who love to chase the little white ball.