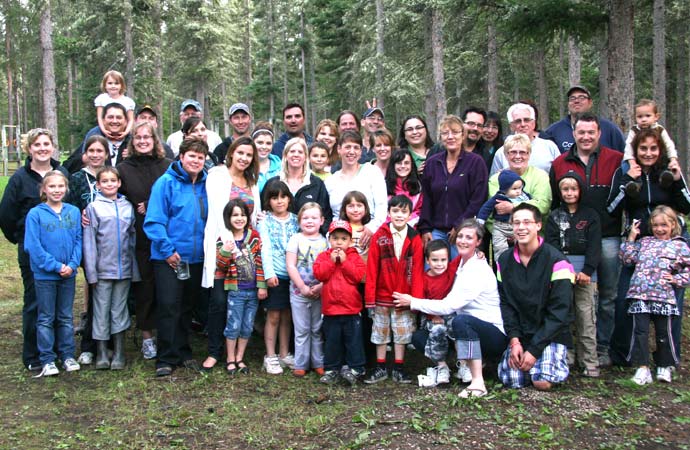 PWK graduates, teachers, and their families met over the long weekend in Fort Smith.Photo Meagan Wohlberg.

A lot can happen in 20 years, but as graduates of PW Kaeser High School in Fort Smith discovered at their reunion over the weekend, some things never change.

“Surprisingly, people are basically all the same,” said Megan Stock, one of the reunion’s organizers who traveled up from Edmonton.

Still, it was a nice surprise for everyone to see each other all grown up.

“It’s been 20 years since we graduated, which is hard to believe,” said reunion organizer Shari Olsen, who lives in Fort Smith. “I can’t believe it. It’s crazy.”

Twenty-eight grads from 1987 to 1994 along with their families gathered in Fort Smith over the long weekend to find out what their old schoolmates have been up to.

Among them was Ken Malanchuk, who served as principal of PWK High School from 1975 to 1994. He and his wife Sheila, a former substitute teacher at the school, drove up from Salmon Arm, B.C. for the reunion to see their old students.

“We wouldn’t miss this for the world,” he observed.

“It’s sort of odd to see people I remember as being 14 to 16 years-old now having full-fledged families of their own,” he noted. “It kind of makes you look at your own mortality.”

The reunion kicked off with a meet-and-greet barbecue at Queen Elizabeth Park, followed by drinks and dancing at The Landing. Saturday featured a round of golf at the RCMP Blue & Gold golf course, a hike at the Salt Plains and a tour of their old alma mater, PWK High, “Home of the Huskies.”

Olsen said it was a good excuse for people who have scattered across Alberta and the NWT to take a holiday back in their home town.

“Lots of people haven’t been up here for a while,” she said. “Fort Smith’s changed somewhat since people have left and it’s a good reason for people to come back and check things out. It’s just always nice to regroup with old friends.”