Teaching the game of life through golf 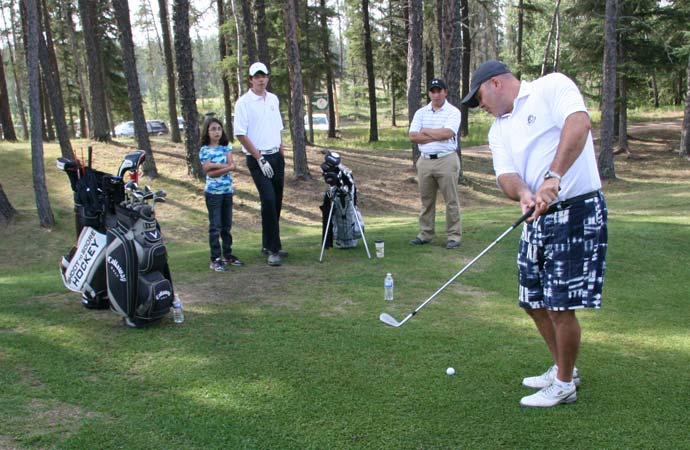 An Aboriginal from northern Manitoba, Leach teaches hockey in winter and is a golf pro in summer. He came to Fort Smith to instruct as part of an Aboriginal Sport Circle program for small communities.Photos by Don Jaque.

All hockey fans know the worst thing that can happen to an NHL team in the play-offs is to lose, and then, “It’s time for them to go golfing” – like golf is some kind of punishment.

Stanley Cup-winning right-winger Jamie Leach has taken exception to such thinking and parlayed golf and hockey into a summer/winter companion profession by teaching both sports. He tours across Canada in summer teaching golf and his company, Shoot to Score Hockey, offers instructions to aspiring puck-handlers of all ages during the long winter months.

Blessed with top skills in both arenas of play, Leach is a PGA golf professional in addition to having spent 13 years as a professional hockey player. That includes winning a Stanley Cup ring with the Pittsburgh Penguins in 1992.

“We go across Canada. We’ve been everywhere, from Nova Scotia to the Yukon,” said Leach, a big man who is calm, casual and friendly. 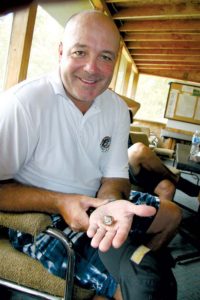 Jamie Leach shows off the Pittsburgh Penguins Stanley Cup ring – solid gold and heavy with the Penguins logo on front and his name engraved on the side.

He was in Fort Smith last week as part of an NWT Aboriginal Sport Circle program bringing golf instruction to small, northern communities. He taught an assortment of Fort Smith groups Thursday.

Leach said his hockey camps are available for all ages, but work mostly with youth. In addition to teaching game skills, the camps focus on making positive life choices. He partners with his father, Reggie Leach, who earned fame on several winning Philadelphia Flyers teams. That included winning Stanley Cups, playing as a winger with Bobby Clarke and ultimately winning the Conn Smythe Trophy as the most valuable player to his team in the play-offs. A recovering alcoholic, Reggie Leach offers youth a message rooted in personal experience on how to make good life choices.

“They are what we call youth development camps. We push the respect factor – with each other, coaches and with themselves,” explained Jamie.

The messaging is similar in his golf instruction.

“We work with beginners and get them exposed to golf, and through it, the game of life. Golf is a family game. It teaches youth so much. It teaches them to be honest. It even teaches them math,” said Leach, obviously fervent about his belief in the value of learning the game. “Our kids today have very strong thumbs.”

He said today’s kids are at home playing computer games and need to get out and “get exposed.” Golf is a good way to do that, he says, because while you are learning, it can be fun.

“If you are having fun at what you do, you will want to do it more,” he said.

He proved to be an excellent golf instructor. His classes at the Pelican Rapids Club consisted of players of all ages and skill levels, and juggling that was not a problem for him. He started the groups on the driving range and then took them to a green for a review of short-game technique. They then played a few holes with him, learning as they went along. He was able to pick out problems and offer diagnostic solutions with expert advice.

Leach is Aboriginal and hails from Manitoba, where his company is based. This is his second of three years bringing golf instruction to small NWT communities. He will return again next summer to go to the final three communities.

While in Fort Smith he met with representatives of the Minor Hockey Association and discussed the possibility of returning in winter for a hockey camp.