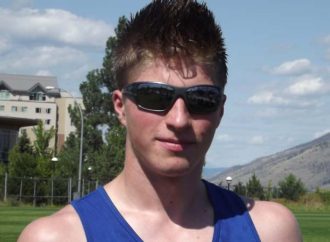 It was a special moment for one of Fort Smith’s top young athletes last Friday, as local track and field competitor Evan Tordiff was chosen to read the Athlete’s Oath at the opening ceremonies of the 2011 Western Canada Summer Games in Kamloops, BC.

“I was a little bit nervous at first getting up there to read that in front of all of those people,” said Tordiff. “But I just felt it was a huge privilege to be chosen to do that.”

At 14, Tordiff was one of the youngest competitors at the games, going up against athletes as old as 21 in his track and field events.

But being the youngest on the track did not hold him back.

“You just have to look at it from my perspective,” he said. “I know I can’t compete at the high level of some of the other athletes, but I get to see where I will be in the future with their age and level of experience.”

While Tordiff may not be placing first in his events, he is raising the bar for other track athletes in the Northwest Territories. On Saturday afternoon, Tordiff set the new NWT record for the 1,500 metre race by 6 seconds, with a time of 4:36.

“It was good, I wasn’t expecting too much, I hadn’t been giving it too much training,” he laughed. “But I set the new NWT record, which is what I was aiming for.”

Tordiff did not place in his 800 metre heat yesterday, but said he still had a great time.

“I just love running the races and the other people are like, ‘What, you’re 14?’” he said. “It feels really good to be out here competing with other provinces and territories as a representative from the Northwest Territories at the top end like that.”

As week one of the games comes to a close in Kamloops, BC, athletes from each province and territory are heading home with much more than scores and medals.

Phillips and her beach partner Danielle Soucy, 18, had a chance to compete against the best young women players in Western Canada over the weekend, and said the experience was an educational one.

“The games have been challenging,” said Soucy. “They’re more than what we’re used to, but I’m so glad we got to come out here. We are learning incredible amounts and are just so impressed by what the girls our age can do.”

“You learn a lot with better competition,” said Phillips. “There’s just no comparison, the training that you get here gives you more confidence and experience than you could imagine.”

The team did not manage to win any of their matches, but coach Stacie Bengts said they improved over the weekend.

“They got a lot better,” she said. “They finally had their communication down.”

It was the girls’ first major competition, but probably not their last.