Aboriginal lawyer gives back to communities with free legal advice 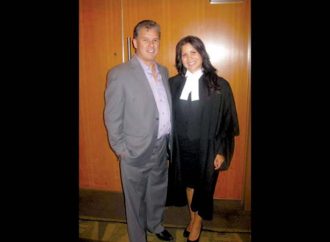 Corrie Flett may be one of the first Aboriginal women from northeastern Alberta to ever pass the bar exam and become a lawyer, but she modestly deflects any individual praise of her efforts.

Flett insists her accomplishments are a testament to the support she received To that end, the young woman is giving back to communities that helped her offering free legal services for a day each month on a rotating basis in Fort Chipewyan, Janvier, Conklin and Fort McKay.

“It’s important to me to give back to the community, using the resources and knowledge I have now,” Flett said. “My accomplishments are not solely individual. I had a lot of support from my family, ACFN and the Athabasca Tribal Council.”

Flett was in Fort Chipewyan on September 9, offering free legal advice to anyone in the community who needed it.

She heads to Conklin in October and Janvier and Fort McKay in November before returning to Fort Chipewyan in December.

Flett, who spent the first ten years of her life in Fort Smith before moving to Fort McMurray, completed law school at the University of Alberta in Edmonton, but says she never doubted that she would return to Fort McMurray, Fort Chipewyan and the region’s other small communities to work.

Her large family – she’s part of the Bourke and Flett clans, two of the biggest families in Fort Smith and Fort Chipewyan – played a big role in convincing her to come back north.

It was one of her first clients during her articling in Fort McMurray that helped guide the work she is now doing in the communities.

Flett recalled her client hitchhiking to Fort McMurray from Janvier to get legal advice from an inexperienced law student.

His efforts made showed her how great the need was for legal services in native communities around Fort McMurray.

“I don’t feel like I’m doing people a favour. I’m doing what I should be doing,” Flett said. “Even if I did not know them, their support as a band member or a member of the ATC helped me.”

Looking back on her elementary school time at JBT in Fort Smith and high school in Fort McMurray, Flett said she was always encouraged to reach for her goals.

She says being Aboriginal was more of a support than it ever was a hindrance.

In law school, she was heavily involved in the U of A Aboriginal Law Students organization, another way for her to help out with her peers.

She said that throughout her four years at the school, the number of Aboriginal students grew substantially, making it easier to maintain a cultural aspect to the studies and keep them all “grounded.”

While in the communities, Flett – a family law specialist – can write wills, help with estate planning, give advice on real estate topics such as transfers of land, assist with small business incorporation, answer questions on crime sentences or other criminal law and help with family law issues like divorce, separation and custody, among other things.

She said that since the service is free, “there are no dumb questions,” and she encouraged anyone to come out.

“Even if I don’t know the answer I can help point you in the right direction.”