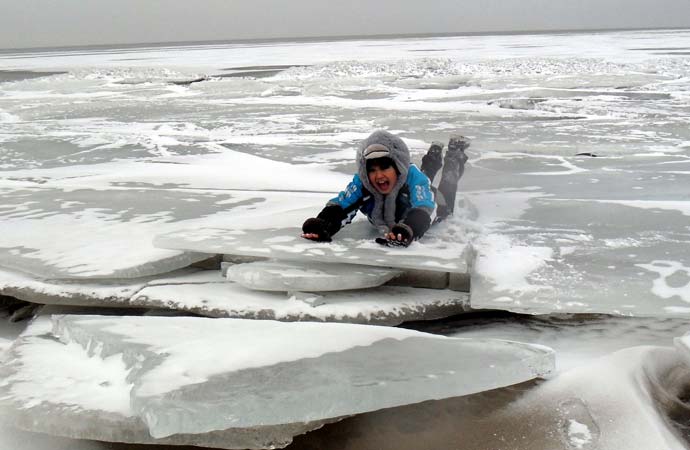 “Surfing Nowhere” depicts Machaela Larocque on a field of ice.Photo by Deninu School.

Students at Deninu School in Fort Resolution were given the opportunity to share their concerns about the changing northern landscape through a photo project last year.

Now, impressive snapshots from the first-of-its-kind program are to be published as a book this fall.

The photo project, which tied into the Grade 7 and 12 social studies curriculum, was the brainchild of Jennifer Fresque-Baxter, a PhD candidate from Wilfrid-Laurier University (WLU) in Ontario, as part of her research into how people’s relationships to the land are affected by changing water conditions in the region.

Having interviewed elders, land users and different community members about their concerns and values in relation to land and water, Fresque-Baxter saw the voice of youth as a necessary piece to be included as well. 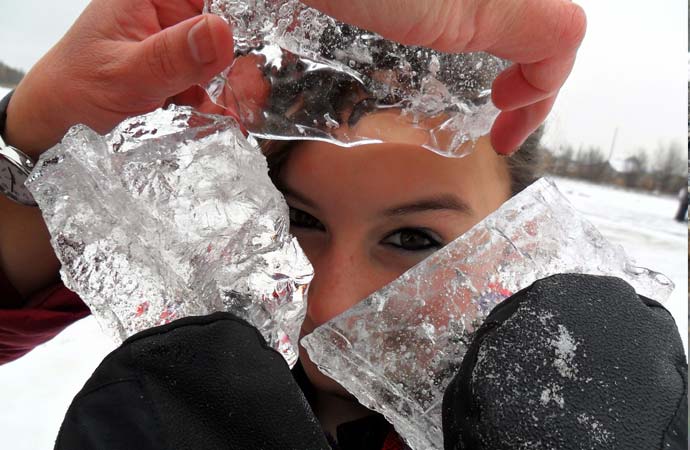 Kathleen Fordy’s identity is explored in “Shades of Ice.”

“I wanted to make sure youth were included in the project because they are the future community leaders,” she told The Journal. “And I thought photography was a good way to bring them in.”

The staff at Deninu responded enthusiastically to her proposal and decided to make it part of the students’ education, forming a multimedia unit using photography to enhance literacy by building writing around the images. Students were given cameras, taken on field trips and encouraged to go out on the land to capture their feelings and concerns about the environment – and then write about it.

“They had to write stories or poems to go along with the photos to help give their message,” said Fresque-Baxter. “A lot of them talked about concerns with water quality, concerns about the fish.

Some did poems, someone did an interview with a fish. They took a really unique approach. So taking pictures of the ice and water was used to springboard the writing.”

Grade 12 social studies teacher Aaron Jezovit said part of the value of the project was its empowering aspect. Not only was it self-directed, allowing the kids to be as creative as they wanted, but it encouraged action. 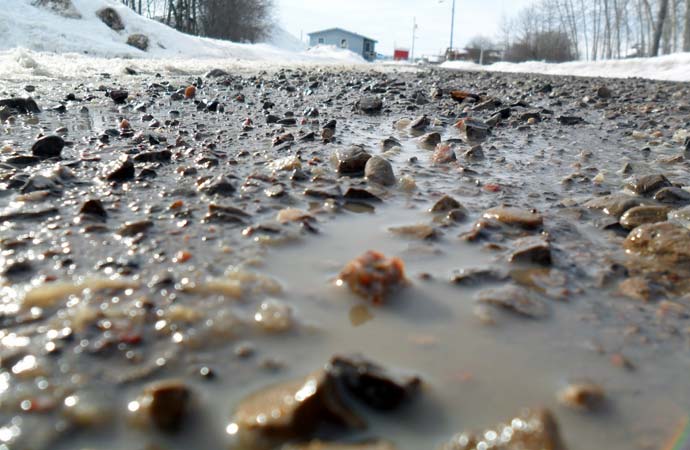 “Obstacle” attempts to capture the essence of an icy road.

“They took their land, what they saw, and wrote what they felt was going on and their worries,” he said. “Lowering water levels is the major thing the students saw. They understood what they could do – not just learn about it but have the ability to do something. Rather than just worry, they can show people their photos and their experience.”

For Dan Summers, the principal of Deninu, having Fresue-Baxter initiate the program also meant establishing long-term goals for the students.

“It encouraged globalism and introduced the idea of job opportunities and different routes available to the students in terms of creating life goals and expectations,” he said. “With the culture and the environment, there are great opportunities here for photography. And having Jennifer here, who is doing her PhD, encourages staying in school and continuing education.”

Having inherited the cameras from the program, the school has the opportunity to continue offering similar projects down the road – something Summers has indicated he wants to see continue.

“The greater opportunities we give students, the greater the opportunity to realize lifelong goals,” he said.

WLU is currently engaged with the GNWT in a ten-year partnership to develop the territory’s water strategy. Fresque-Baxter’s research centred around Fort Resolution is one integral element of the overall project.