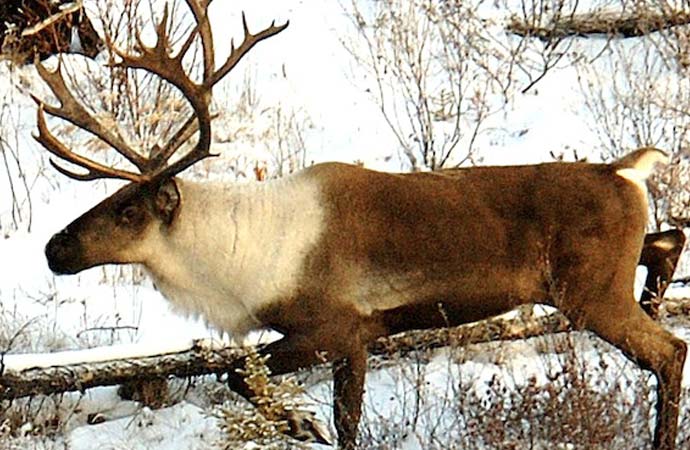 The Beverly caribou herd has been relocated in the location where elders said they were all along.

A new study casts doubt on the longstanding belief that the Beverly caribou herd, which used to roam as far south as Fort Chipewyan, has dwindled in numbers to the point it has nearly disappeared.

University of Alberta PhD candidate John Nagy’s report claims that rather than becoming nearly extinct, the Beverly caribou herd has merely relocated further north, to use calving grounds previously associated only with the Ahiak herd.

Nagy analysed satellite data collected through the 1990s and 2000s from collars on caribou calves to come to his conclusion. He said the results mark a major shift in the commonly accepted scientific belief that caribou herds always return to the same calving ground.

The plight of the Beverly herd has led to an increased focus on conservation efforts for barren ground caribou over the past few years.

A Beverly calving ground reconnaissance survey in 2009 found only 84 breeding cows, down from over 5,000 in 1994. Population counts of the Beverly herd have repeatedly stated that the herd has decreased by over 400,000 animals since the 1980s.

Those surveys, combined with anecdotal evidence from outfitters saying they were seeing huge decreases in the numbers of caribou on the traditional migrating route of the herd, led to fears the Beverly caribou had all but disappeared.

Not so, said Nagy, pointing to his research showing that the Beverly caribou have shifted their calving ground to a spot on the west side of the Queen Maud Gulf region, on the shores of the Arctic Ocean in Nunavut.

“We verified all the other major (caribou) herds, and we verified the existing Beverly herd,” Nagy said.

Plus, he added, his study’s findings support what elders in Northern communities have been saying all along – caribou change their calving and migrating patterns over time.

“We’ve only been tracking caribou for 45 years,” Nagy said. “These caribou have been around for thousands of years. To suggest we know everything, it’s just not correct.”

Ross Thompson of the Beverly Qamanirjuaq Caribou Management Board said the board has not yet come to an agreement on a response to Nagy’s findings.

“The board says that since elders say it has happened before, it is plausible,” Thompson said.

But Thompson cautioned that the debate over where the Beverly herd may be should not detract from conservation efforts.

“It’s still full court press,” he said. “The board doesn’t want the debate to go on and on while management of the herd languishes. Now we’ve got to crank up the pressure to manage both calving grounds.”

Traditional Beverly calving grounds are in the Thelon basin, overlapping Nunavut and NWT borders. This past summer the Nunavut government did a full population count of the Ahiak herd that calves on the shores of the Queen Gulf Maud.

Given Nagy’s data, that population count should find both the Beverly caribou and the Ahiak caribou.

Results from the Ahiak population count are expected by the end of the year. The only full population estimate of the Ahiak herd was made in 1996 by the GNWT biologist of the time, Anne Gunn, who estimated the herd at 200,000 animals.

During the past three summers, the GNWT has flown reconnaissance surveys over the Ahiak calving grounds. Those surveys found roughly 60 per cent decreases in the number of cows on the calving grounds.

The reconnaissance surveys are not full population counts, and as such do not necessarily mean the herd has decreased by 60 per cent.