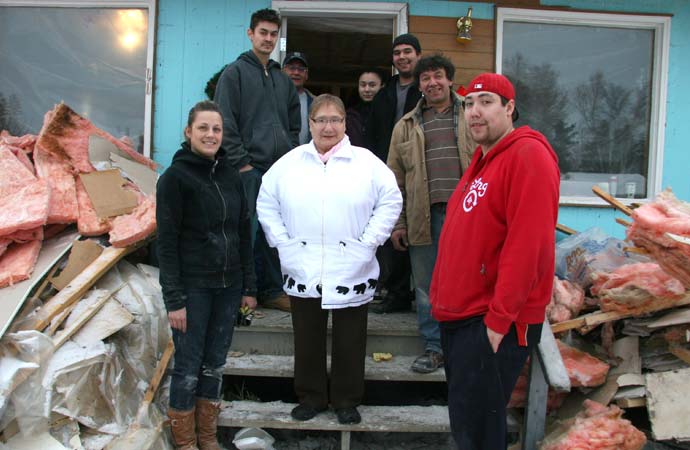 Cathy Lepine (centre) and some of the renovations crew at the Heron house working on the Christmas wish project, coming together to help a family in need at Christmas time.Photo: Don Jaque.

A little girl will get her Christmas wish thanks to the help of Fort Smith residents who have rallied to help her struggling family.

Ten-year-old Chelsea Heron’s dad, Greg, was diagnosed with pancreatic cancer in the early fall and has been making regular trips with his family to the Cross Cancer Clinic in Edmonton.

He had only just recently taken over a café, named “Chelsea’s Take-Out” for his daughter, and though it has become a popular eatery for Fort Smith locals he has not been available to run it.

To make things worse, his house had been in the throes of renovation for some time.

Cathy Lepine, the cook at the café, was told by Greg of his daughter’s wish for a Christmas tree in their house and she decided to take action. She organized a work party to fix up the Heron house. In addition she planned a benefit.

The idea of the renovation took hold and a major work party commenced with over a dozen people involved. Different people were coming and going all last weekend with teams working on different parts of the house. It was gutted down to the bare walls. Work continued on into the week with a keen, dedicated crew.

Greg and his wife Faye, along with Chelsea and two of Greg’s sisters, were at the hospital in Edmonton during the last week while all this was happening. All the efforts to support them are intended to be a surprise when they return.

The renovation work is continuing at pace in hopes that the house repairs would at least be well on the way by the time the group returns.

Meanwhile, the plan for the benefit, a Winter Music Festival, is taking off as well.

Her plan is to hold an auction the night of the benefit and she said Northwestern Air Lease had just donated return tickets to Edmonton as a prize. There will be live music and dancing. That event will be at the Roaring Rapids Hall Friday, Dec. 23, a classic Fort Smith celebration with stew and bannock.