The interesting life and times – of Dora Jones 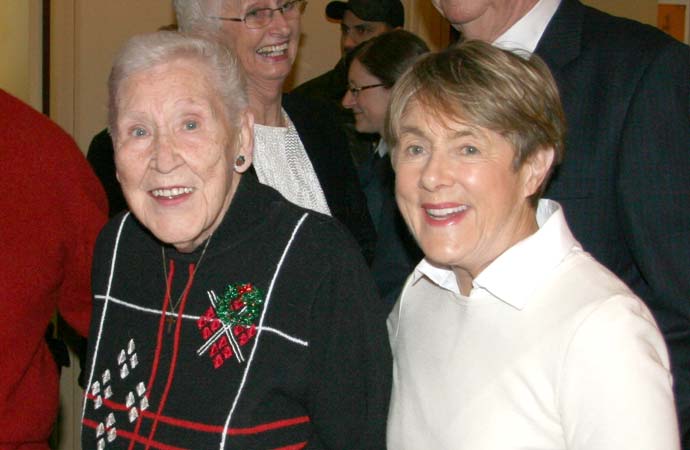 Dora Jones (left) with Sharon Johnston, the wife of the Governor General of Canada.Photo: Meagan Wohlberg.

When Dora Jones was a teenager, she and her mother and little brother ran a boarding house on the sea side at Blackpool on the northwest coast of England.

People came there to be catered to, a holiday destination since Victorian times. So the rooms would stay filled, a great effort was made to make guests feel welcome and enjoy their stay. If they came in the summer and liked it, they would plan to return in winter, booking rooms for a holiday stay with their family over Christmas.

“The beach was clean golden sand. Seven miles of golden beach. That was my playground when I was a child,” remembers Dora, fondly.

There were cotton mills nearby in Lancashire and they would shut down once a year to do maintenance. They cooperated so each mill closed at different times so the workers could go on vacation without huge crowds. Many would come for a stay at the beach at Blackpool.

“We had a place on the promenade, an area that was kind of high class,” said Dora.

The cost of rooms ranged from big hotels like the Savoy and the Imperial and what you would find on Coronation Street, a working class neighbourhood in Manchester.

“Ours was a step up from those places. We were a bit snooty,” she observed, laughing.

Blackpool is on the sheltered Irish sea and looks west to the Isle of Man and Ireland. It is still, today, an exotic holiday destination for the British Isles (www.visitblackpool.com). Dora said you could go anywhere in England and mention Blackpool and people would know immediately what you were talking about. An iconic tower, inspired by the Eiffel Tower in Paris was completed in 1894 and still stands today, a great landmark that can be seen from a distance. When people arrived on the train, Dora said, they would get very excited once the tower came into view. On the top of the tower were pubs, restaurants and dance floors (and now-a-days a circus!).

“You could not go there for a visit without having gone up the Blackpool tower.”

Families would arrive, get set up with their rooms and then head right away to the seaside. They would take everything to the beach and spend the day there – friends and neighbours transposed from home, sitting on deck chairs. They would eat ice cream cones – frozen custard really – that would be brought around in a box on wheels.  A cone cost a penny.

The boarding house had 11 rooms. Guests would get tea in bed, a three course breakfast, mid-morning coffee, a three course lunch, afternoon tea and a five course dinner at 6:00.

Guests were often regulars and many returned year after year. Christmas was a great deal of work, for there was lots of food to prepare and the place had to be decorated. Every Christmas a different theme transformed all the common rooms with a festive ambiance and of course there was a decorated tree in the sitting room.The Christmas meal took considerable preparation and was a special event. The butcher would be told to put a beef tongue in vinegar so it could be served pickled with the ham in the traditional way. There was turkey and beef brisket and much more. Small presents were wrapped and placed in a covered casserole in the centre of the table with a string tied to each leading to a different placing. It was a wonderful time.

In 1939 the war loomed and life changed dramatically. Their lodgings were assessed and the rooming house was deemed to be a residence for 18 men. They were ordered to get rid of all the double beds and install single cots. Blackpool became a training ground for the Royal Air Force and and recruits – budding new airmen – began arriving for their six week training stints where they learned basics, starting with Morse code, which they practiced constantly.

“You couldn’t say no. It was the war. Those were orders,” recalls Dora, matter-of-factly.

The amazingly beautiful beach, which was long, wide, flat and firm and easily big enough for invading airplanes to land on, was spiked along its length with railroad ties.

Christmas and holidays were no longer a consideration.

“We were all too busy. There was so much to do. I peeled a pail of potatoes every day, until my hands looked like potatoes.”

Food was rationed right down to fixed amounts of butter and sugar. She did the food buying and every purchase had to be recorded with five copies. There was always the concern they could be inspected at any time. Dora said everything was recycled. They had five bins in the back yard and every single thing left unused had its purpose. It was a trying time.

“It was very difficult, but we got through it,” she noted stoically.

Her late husband Ron was a warehouseman stationed at an air force training base in Manitoba. In 1942, when the bombing of Britain’s cities by the Germans became so intense and dire that citizens were loaded on crowded ships and sent across the Atlantic, Dora made the long voyage to Canada to be with him. It was what would be her future home after the war (although she did not know that then). That next chapter in her life would take her and her young family to Fort McPherson, Northwest Territories, and eventually in 1958 to Fort Smith where, at 93 years young, she resides happily today.