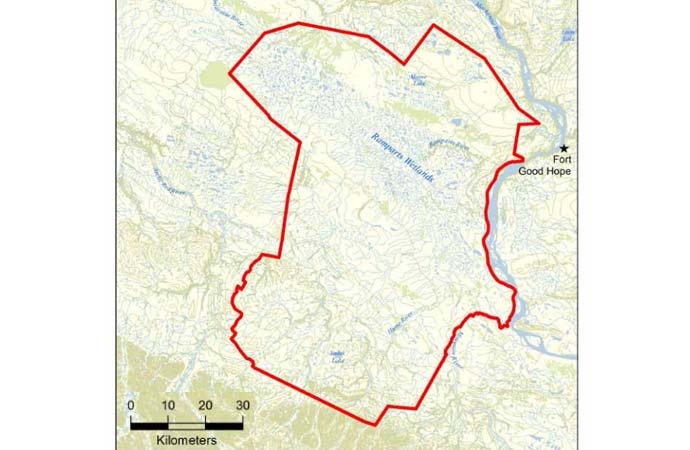 As the Ramparts region in the Sahtu comes one step closer to being permanently designated a protected National Wildlife Area, the NWT Chamber of Mines is pushing hard for the tract of land to stay open for future oil, gas and mineral development.

“Mineral deposits rich enough to mine are rare and hard to find, being found where Mother Nature put them, not necessarily where we might prefer they be located,” said Chamber president Pamela Strand, claiming investment in the NWT has suffered significantly in the last five years despite a global exploration boom. “Given the rarity of high mineral potential lands, and their importance to creating future economic opportunities, we believe they should remain open for development.”

The K’asho Got’ine Dene and Metis of Fort Good Hope identified the area, which contains wetlands feeding into the Ramparts and Hume Rivers, as culturally and ecologically significant back in 2002, entering the process to designate the area a wildlife reserve through the NWT Protected Areas Strategy (PAS) in 2005.

This month, the working group charged with drafting a report on the boundary and status of the Ts’ude niline Tu’eyeta area released its recommendations that a 10,103 km area – 67 per cent of the original proposal – be made permanently off-limits to industry.

But the Chamber of Mines is lobbying to keep the area, which could contain high levels of extractable oil, gas and minerals, from being permanently protected, instead hoping the Canadian Wildlife Service (CWS) will opt for a flexible or temporary protective scope for the park for the sake of future mining interests.

“If permanent protection is given now, what is possible with future technology and what the needs of future generations are will not matter, as any resource development opportunities provided by the Ts’ude niline Tu’eyeta area will have been nullified,” Chamber executive director Tom Hoefer said in a statement to CWS.

The socio-economic assessment portion of the report concluded that oil development could begin as early as 2015, but that lack of existing roads would mean another 10 to 20 years for other non-renewables.

The Chamber is requesting the land be protected only where absolutely necessary through existing environmental regulations, using the Sahtu Land Use Plan, which reviews protected areas every five years, as much as possible.

But the K’asho Got’ine and Metis said they think the deal is a fair one.

“This is a significant compromise considering that virtually the entire area of moderate to high mineral potential has been left available for future disposition,” they stated in the report. “Full protection of the recommended area would result in considerable annual economic benefits from renewable resources; and, this does not include the cultural and spiritual values of the area to which a monetary value cannot be attached.”

The area is home to large numbers of migratory birds along with several at-risk species, including woodland caribou, and is used extensively for harvesting fish, game and fur-bearing animals.

It is currently protected from development by a land-withdrawal until November 2013, to allow for the completion of the PAS process.