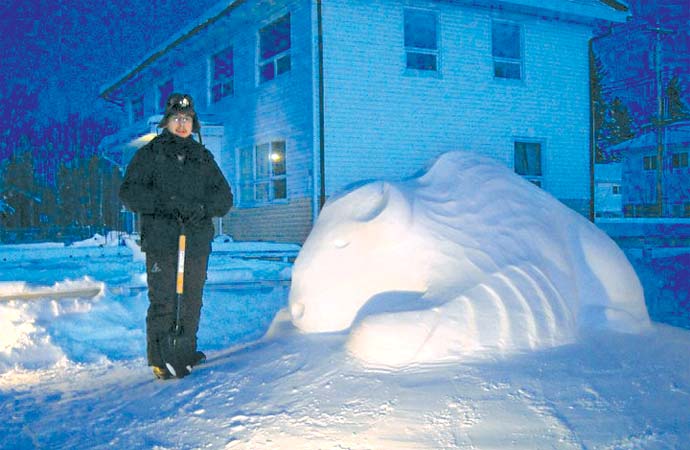 A polar bear, a buffalo and a seven-foot snowman are just a few of the snow sculptures that have adorned Robert Francis Cockney’s lawn, which serves as his canvas during winter.

Art has always been a way to relax for the artist from the Arctic coast, who has developed a gift for sculpting highly complex pieces.

But snow sculpting isn’t all fun and games for him. There is a message behind the art. A giant polar bear currently sits on his front lawn to remind viewers of melting ice caps and global warming. These dramatically affect how the animals hunt, and that concerns Cockney. Last year, a great buffalo spanned half of Cockney’s lawn, a sight he hoped caused viewers to pause and reflect on the delicate balance of our environment.

He and his family moved from Tuktoyaktuk to Fort Smith in 2006, he said, in order to have more opportunities and a better life for his three daughters, Agnes, Annmarie, and Andie.
Fort Smith residents really seem to appreciate his creations.

“I have always felt a great sense of respect from the community,” he told The Journal. “My children come home from school and people are asking, what I am going to create next?”

Snow conditions of the subarctic are a challenge when creating the large sculptures, much different from the windblown snow he learned on in the High Arctic.

In Tuktoyaktuk, the snow was much more dense, and allowed for more flexibility in creation, Cockney observed. During a snow sculpting competition there he created a seven-foot snowman that looked so perfect the judges needed to touch the snow to make sure it wasn’t fake. He ended up coming in second place.

Snow sculptures are not his only medium. Cockney has been carving sculptures out of soapstone and caribou antler since the early ‘90s. He recently finished a piece he titled “The Inuvialuit Hunter.” It depicts a hunter sitting on a kayak made of moose antler, which rests on a beluga whale made from boulder alabaster on a display stand made of black chlorite rock. That  piece took him over 30 hours to create.

Although his soapstone art carvings are for sale, there have been times that Cockney donated his work to support various causes and community events. He views his talent as a gift and above all else wants to share it with his family and community.

When asked what he was planning to create and display outside in February, Cockney smiled, saying, “My three girls want to build something with me, so I will let them decide what they want to make.”

You can observe Cockney’s handiwork outside his home on Field Street in Fort Smith, or his soapstone sculptures often at the Rusty Raven gift shop.