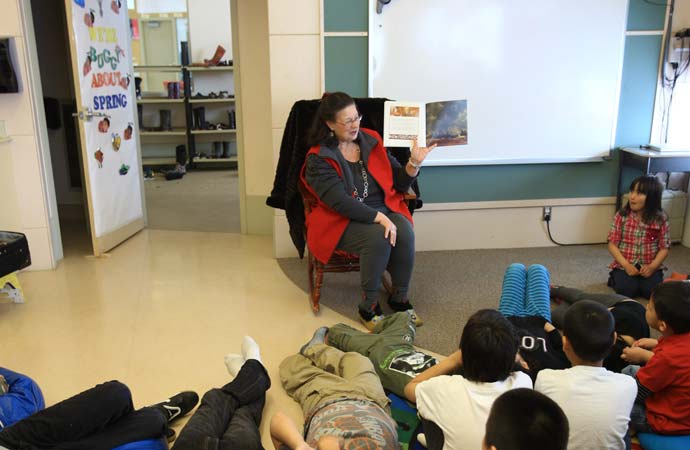 Andrea Spalding reads from her book, Secret of the Dance, to children in Tulita. The story tells the true story of how Judge Alfred Scow snuck into an outlawed potlatch in 1935.Photo: Adam Hill.

It was the first time Spalding, who lives on a small, rural island on the West Coast, visited the Northwest Territories. She said stories are important tools for opening up new worlds to people in small or isolated places, such as the North.

“It’s a door on the entire world,” she said. “Through story, you honour people’s sharing of emotions, no matter who they are or where they live – we all share the same emotions and fears and loves. Through stories, you can look through the window of a world that’s not your world. So it widens your perspective, and I just love that aspect of it.”

As a child, Spalding grew up in a poor household in inner-city Manchester, England, where books were the first gateway to different cultures and places around the world.

“You learn about tolerance and intolerance through books; you learn about totally different ways of life,” she said. “And that’s how I explored. I lived in a very narrow world and my entire exploration for the first 10 to 12 years of my life was through books until I got to a point where I could step out, physically, from my own environment and start exploring for myself. And I’ve never forgotten that.”

The tour was established to promote reading as a classic pastime to be shared with friends and family. Spalding’s interactive presentations, which incorporate song and other oral stories from the days when she was a folk singer and storyteller, encourage all forms of literacy beyond reading and writing.

“I think of myself as a presenter with an audience because, as a storyteller or a writer, you’re two halves of the same thing. There’s no point writing books if no one’s going to read them; there’s no point telling stories if there’s nobody there to listen. So I like to consider the gathering as a whole, a circle, a sharing, rather than me being up on a stage and the audience down there. I like it to be fairly informal, and I like it to be a dialogue. I hope people ask questions and come prepared to have fun and to be part of a sharing. And hopefully some people tell me stories, too!”

She said that while books may change, stories will always be around.

Spalding was on tour with her new book, Seal Song, a Celtic “selkie,” or shapeshifter, folk story about a young boy’s friendship with a seal. She said folklore has universal appeal that makes it relatable to anyone, anywhere.

“No matter how sophisticated people’s lives are, everybody has a nugget of folklore in them.”