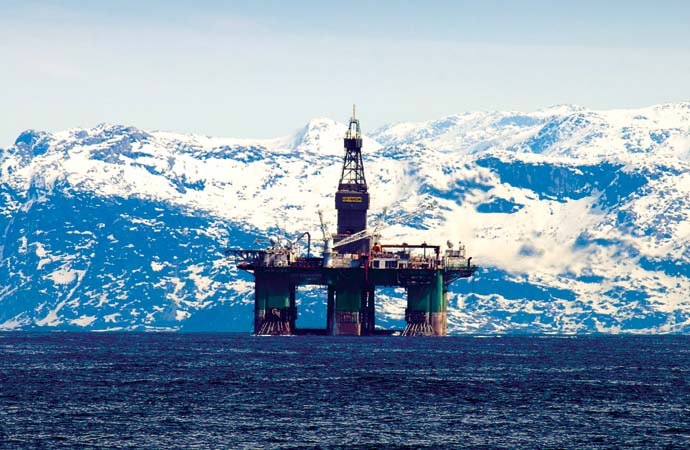 In the Greenland waters of Davis Straits, the world’s most controversial oil rig – the 53,000 tonne Leiv Eiriksson – is operated by Cairn Energy.Photo: Greenpeace.

The Arctic Ocean is now open to oil exploration and the government of Canada hopes for substantial interest in potential oil reserves off the Arctic coast.

The federal government recently put a call out for bids on the Beaufort Sea that will see the Arctic waters off the coast of the Northwest Territories opened to offshore drilling exploration for the first time.

Aboriginal Affairs and Northern Development Canada (AANDC) has put six parcels, covering over 900,000 hectares in the Mackenzie Delta and Beaufort Sea, up for auction.

NWT Minister of Industry, Tourism and Investment David Ramsay said the move is good news for the territorial economy.

“In the long run, I think what is in the Beaufort Sea is a tremendous opportunity for our territory,” he told Northern Journal. “It could rival the Gulf of Mexico in terms of potential for petroleum development.”

Ramsay heard the news while in Houston, Texas attending the Offshore Technology Conference, where he was promoting oil and gas development in the territory.

During a press conference, Ramsay said the area “has enormous potential to supply both natural gas and oil to the North American global market.”

Ramsay said there is a great deal of interest in offshore drilling along the coast, noting that Chevron will be doing some seismic work on the Beaufort this summer. He added that ExxonMobil plans to do exploratory drilling within the next five years.

“I think what we’ll see here soon is the renewed focus on the Beaufort and the opportunities that are out there,” he said. “With the call for bids closing in September, I think that’s going to be a good gauge of the interest, and I think it’s going to be big interest.”

The National Energy Board (NEB) concluded its Arctic offshore review on drilling in the Beaufort in February, establishing requirements for proponents wanting to explore the Arctic waters.

To date, no applications have been put before the NEB, but Ramsay said they will be coming soon, considering the amount of interest in drilling off the coast of Alaska, where companies like Royal Dutch Shell hope to begin their offshore drilling program this summer.

“Companies, I think, have been given a set of rules to go by and I do believe there’s research and development into equivalencies and ways to drill in the Arctic that may satisfy those requirements in the review, and so I do believe we’ll see some drilling in the Beaufort Sea sooner rather than later,” Ramsay said.

The call for bids is scheduled to close September 6, 2012.