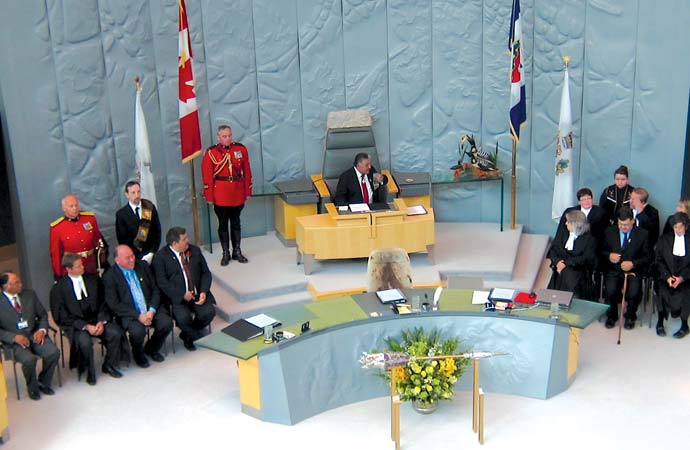 All the usual pomp was there – Dene drummers, Mounties in red serge, a choir of school children singing the national anthem – but the Speech from the Throne opening the third sitting of the 17th Assembly last Wednesday broke with tradition.

“It is not the customary ceremonial welcome,” Commissioner George Tuccaro told the packed Legislative Assembly as he opened the speech that for the first time outlined the government’s agenda for the months ahead.

There were no surprises. Achieving a devolution agreement within the next two years remains a top government priority, and the Mackenzie Gas Project still crowns its wish list despite evidence that energy companies are more interested in abundant supplies of shale gas close to major southern markets.

If the pipeline project finds new life, it would inject $68 billion into the territorial economy and open resources along the pipeline corridor.

“Coupled with devolution, it would spell a new age of prosperity,” the commissioner said.

The final step toward self-government in the Northwest Territories is transferring control over land and resources from the federal government.

“Multi-millions of dollars in government revenue depend on it,” noted Tuccaro, saying the initiative has the “utmost importance.”

Sahtu leaders were prominent among dignitaries filling the public gallery; the speech trumpeted an agreement signed the day before bringing the Sahtu into the devolution tent with the Inuvialuit and Métis, and stressed the need for strong working relationships between all levels of government.

“Where there is unity, there is no limit to what Northerners can accomplish,” Tuccaro said.

Taking its cue from Ottawa, the territorial government is committed to streamlining regulatory regimes and environmental review processes while “respecting Aboriginal lands, resources and self-government agreements.”

The commissioner cited government plans to improve housing, education and health care, and its pledge to develop an anti-poverty strategy. The government remains committed to building a $300 million all-weather road from Inuvik to Tuktoyaktuk, and examining the feasibility of a $65 million fibre optic line running the length of the Mackenzie Valley.