Doctor couple signs on to stay in Smith 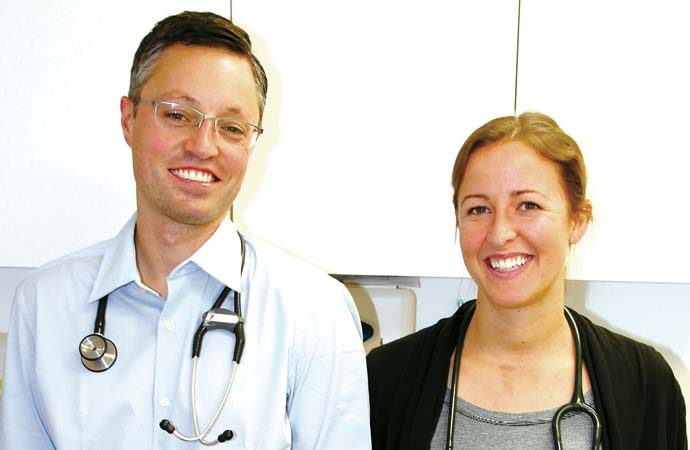 Dr. Robin Norris (left) and Dr. Kate Mehaffey will make Fort Smith their home for the foreseeable future. The husband-wife doctor team both experienced the community as locums, liked it and chose to stay as permanent community doctors.Photo: Don Jaque.

A husband-and-wife doctor team has committed to stay in Fort Smith for at least the next three years, providing consistent health services to the community.

“We really enjoy rural medicine and getting to be involved with all aspects of health care, and Fort Smith seemed like a good fit for us,” said Mehaffey.

The two young doctors originally answered the call to come to Fort Smith to be short-term doctors and both grew fond of the town and its people. They had been in Fort Smith a number of times as locums and came to know the community before making their decision.

Mehaffey said they like hiking and the outdoors, generally, so they appreciate Wood Buffalo National Park and the wilderness experiences the area has to offer. The two also played hockey in Fort Smith in the men’s and women’s recreational leagues when in town as locums. Both said they also look forward to learning how to kayak.

Mehaffey said renovations and upgrades to the Fort Smith Health Centre (FSHC) were attractive and helped them decide to stay in Fort Smith.

“Once the renovations are done, it will be a really nice place to work,” she said.

Mehaffey said some other current FSHC initiatives will also be important improvements.

“We like the shift to electronic records, which will be an invaluable tool for diagnostics and prescribing medication. The enhanced emergency space will be nice as well,” she said. “The planned management of narcotics prescriptions with collaboration between doctors and the pharmacy is necessary because so many locums are coming and going with different doctors prescribing.”

Dr. Norris has a particular interest in palliative care and home care.

“There is room to grow these programs for the community, to assist patients with significant medical problems that make it difficult to come to the hospital.”

Norris said as doctors, they recognize that a person who is dying should be allowed to stay at home in familiar surroundings as long as possible, and that efforts should be coordinated with home care nurses and the patient’s family, along with programs at the elders’ health care facility.

Mehaffey, who is from Nanaimo, BC, took her undergraduate studies in Halifax, NS. She met Norris, who is from Calgary, when they were both in medical school at the University of Calgary. They did their residencies together at a hospital in Victoria, BC.