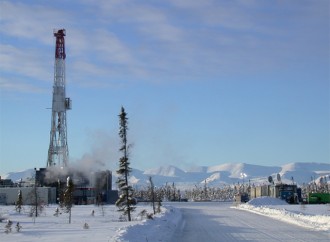 ConocoPhillips froze funding on the Mackenzie Gas Project this spring and Imperial shuttered project offices in Fort Simpson and Norman Wells, but last week the territorial government gave its pipeline office in Hay River a fresh name and a new lease on life.

Opened a decade ago, the office is now known as the Mackenzie Valley Petroleum Planning Office, Dave Ramsay, GNWT Industry Tourism and Investment minister, announced in a speech at the annual Inuvik Petroleum Show.

“This is an opportune time to broaden the mandate of the office, to contribute staff and resources to address other areas of resource development,” Ramsay said, citing oil and gas exploration in the Sahtu region and Beaufort Sea potential as reasons for the change.

Tucked away on a side street in Hay River, the office and its staff of five cost taxpayers $2 million a year. Adding to its responsibilities “will allow us to continue our required efforts on the Mackenzie Gas Project,” Ramsay said.

“Some say the project has entered a period of uncertainty,” Ramsay said, but the territorial government’s support “has never wavered. Natural gas prices have gone down, but they will go up again.”

The Hay River office coordinates the government’s planning and response to the pipeline project, and according to a community resource website, manages funding programs to help residents “meet the opportunities and challenges the project will provide.”

“Everyone else is pulling back and we’re still funding at the same level. Without a project, it’s hard to justify the spending, or know what it is that the office is doing in the meantime.”

According to a government announcement following Ramsay’s Inuvik address, the office will manage “strategic planning, government coordination, support to Aboriginal communities and businesses, and communications support associated with petroleum resource development in the Mackenzie Valley.”

Interest in exploration in the Sahtu has grown as the Norman Wells field declines, though that main feeder of the Enbridge pipeline to Alberta still ranks as the largest resource development project ever undertaken in the Northwest Territories.

With the pipeline operating at 60 per cent capacity, five companies last year bid $534 million to explore in the central Mackenzie Valley.

“We would stress that we are still in the early stages of this project,” he said in an email.

Husky also conducted a seismic survey over 220 square kilometres and will use the results to develop the next stage of its evaluation program, Duval said.