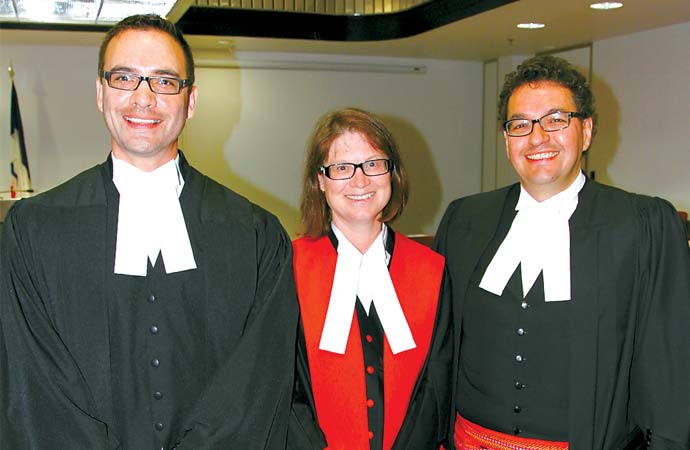 Van Camp Wah-Shee called to Bar: The Honourable Justice Virginia A. Schuler (centre), obviously very pleased, presided over a rare happy court event in Yellowknife last Friday, June 22 with the call to the Bar of Roger Van Camp Wah-Shee, (left). Métis lawyer Shannon Cummings (right) spoke eloquently to a courtroom packed with the new lawyer’s family friends and colleagues, recommending his friend to the court. Cummings noted the importance of support from a strong family that has led to an achievement of someone with roots in the Tli Cho at such a high level. He observed that the occasion was made all the more special because Van Camp Wah-Shee has chosen to pursue his career in the North.Photo: Don Jaque.

Youth in Fort Smith have the opportunity to learn about song-catching, along with drumming and songwriting, in a series of workshops starting this week led by local musician and cultural advocate Veronica Johnny.

The workshops, funded by the Canada Council for the Arts, aim to guide youth aged 11-25 toward forming a connection with their culture by “catching songs” from the Creator – a process that works differently from songwriting.

“Songwriting comes from the brain; song-catching comes from the heart,” said Johnny. “The drummer doesn’t write songs; you ask the Creator for a song. You offer tobacco to the Earth and state the intent, what the song is for, and you clear your mind and connect with the Earth. Basically, what my mentors have told me is that, as a drummer, you are a hollow bone – a conduit. So you let what comes to you just flow and play the drum and open your mouth, and what comes out, comes out.”

This is the fourth consecutive year that Johnny has led drumming workshops with youth in Fort Smith. She said the new drummers began tentatively in the first year, a bit intimidated by the drums and their voices. But by last year, she said, they drowned out her own strong voice with their loud, proud singing.

Johnny said drumming and singing have the power to bring people together in healing. In her second year of working with the culture camps, a small group of drummers and herself caught a song during a time when the youth were hurting from the death of some young people in the community. A song came to them and ended up becoming their favourite song to sing.

“I have to say that song has done more for them than any of the other teachings I’ve shared with them,” she said.

Johnny said she hopes the workshops will be empowering not just for participants, but for the whole community, especially because these songs will come from the youth themselves.

“Ultimately, I hope the youth continue to drum with or without me, I hope that they continue to seek out teachings, and that they have a growing sense of pride in themselves and in their culture,” she said. “And I’m hoping that through the youth playing the drum, it will rub off on the parents and grandparents in the community. A lot of us have a lot of healing to do because of what’s happened in the past and the things others have told us about our culture.”

Though the workshops are just for youth, Johnny said she would find a way to work with anybody who wants to drum, no matter what age.

The workshops take place June 28-29 and July 4-5 at Uncle Gabe’s Friendship Centre. To register or for more information, contact Amy at 867-872-3004 or email info@thejohnnys.com.