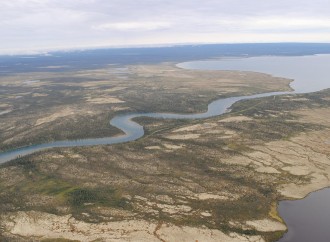 History was made last week as Deline became the first Sahtu community to complete negotiations with the Northwest Territories and Canada on its self-government agreement.

Negotiations were sparked when the Sahtu Dene and Metis achieved their comprehensive land claim in 1993, which provided for individual communities to apply for self-government. Though self-government negotiations began in 1996, an Agreement in Principle (AiP) was not signed until 2003.

Chief negotiator for Deline, Danny Gaudet, said the agreement has not strayed much from the AiP, giving the community more than it bargained for.

“Generally we got more than we anticipated, so we’re happy,” he said.

Gaudet said he expects that membership, including about 1,100 beneficiaries – 600 residents of Deline and approximately 500 Sahtu Dene and Metis residing elsewhere – will support the document.

“I think generally people will like the agreement,” he said. “It does work towards something the community’s always asked for, basically that the community acts on one vision, one idea and one plan…It should make the community more effective and more efficient. It also gives the ability for the community to be able to work together, not on a fragmented basis – all goals of the principle of being an Aboriginal person, where you’re sharing, you’re working together, you’re helping one another. Based on that, I’m thinking, who wouldn’t want that as a government? And I’m confident that people are going to want it.”

Each party still has work to do internally before signing off on the document and sending it to be ratified. Gaudet said he expects that will take a few months. Following that, there will be education on the agreement to ensure people understand what they’re voting on, which could take another year and a half.

If the agreement is passed, there will be an election for a new leader and council of eight to 12 governors, which will replace the Deline Band and hamlet. An elders council will also be established as an advisory group to the main council.

Director of negotiations for the GNWT Fred Talen said the end to negotiations is the beginning of the final stages toward establishing the first standalone, community-based self-government in the territory – something all parties want to see ratified successfully.

“The texts of the self-government agreement, the financing arrangements and the implementation plan, what we would call the final agreement package, is complete from the negotiators’ point of view. There are no other issues remaining and our formal negotiations are concluded,” he told The Journal. “We’re at the final stage leading to the – hopefully – ratification of the agreement.”

He added that the agreement may be of assistance to the rest of the Sahtu communities currently negotiating their own self-governments.

“For the NWT, this is the first community-based self-government agreement, so it’s breaking some ground there and perhaps setting some precedents there,” he said.

Talen said the scope of the agreement and the powers it gives were some of the reasons it took 16 years to conclude.

“I think there’s approximately 30 chapters in the draft self-government agreement,” he said. “So there’s a lot of subjects to cover over the course of negotiations and to be addressed in the agreement.”

The agreement gives the new Deline government jurisdiction over health, social services, lands, education, justice, economic development and local government activities. Gaudet said the goal of self-government is to return the community to its past strength and self-reliance.

“Since I was a kid in the 70s, 80s and even in the 60s, you kind of look at how we’ve been changed from a strong, independent, self-reliant group of people who relied on the land and the resources it provided to survive. Now, if you describe us today, well, we’re not independent – we’re dependent,” he said. “We’re going to try to reverse that by making people independent again and strong and vibrant, educated, strong in their culture and language, but also participating in the modern world.”

Gaudet said the goal is to have the community come together so that the areas of health, education and justice are not working in solitude, but under a unified vision.

“Part of the problem with the system right now is, with the way it’s structured and policies are developed, we don’t have any linkages between different departments,” he said. “For me, if you’re going to have justice, you need a healthy community. How are you going to have a healthy community? Well, you’re going to need strong recreational programs, strong health programs, there should be strong housing programs to make people happier.”

A justice council will be established as part of the new government, as well, which will work broadly with other sectors on crime prevention and health.

“Having control over all of these programs will allow us to support the justice program and work more towards prevention, rather than reacting to the problems,” Gaudet said. “You can fix the problem before it actually happens and have strong, healthy families; then you would not need the justice system.”

Gaudet said it’s going to be an even longer road for those changes to occur, but that the process of becoming a healthy self-government is – and has been – worth the wait.

“I don’t see it happening overnight. It’ll take us five, 10, 15 years. But the reality is that we have to start somewhere. If we don’t start, we’re in trouble. We’re already in trouble,” he said.