No such thing as too young for education 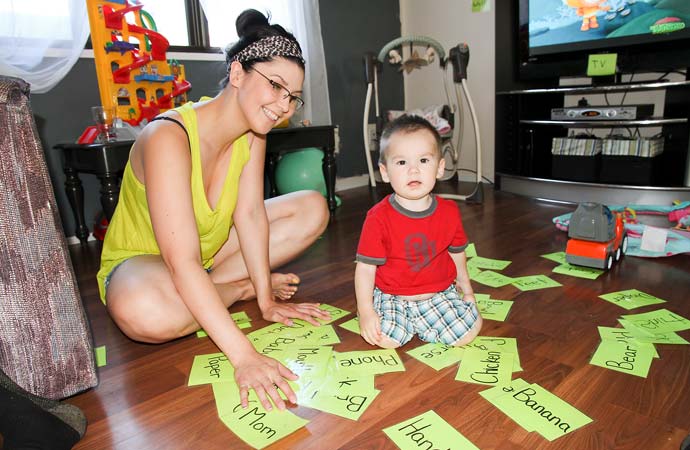 New approaches to education mean children are being taught at younger ages, but how young is too early?

Karen Murray is a young Aboriginal mother raising two babies in Fort Smith and is actively teaching the older one, at 17 months, how to read. She uses a system of flash cards with words on them and has matching flashcards pasted around the house on familiar objects. Throughout the course of the day she relates the names of objects to words on the flashcards to her son Kennedy, and he loves it.

Murray says babies that young have not yet learned language and have no way to communicate, and if they cannot get what they want across, it can be frustrating.

“When they can’t communicate with you they get frustrated, even throw a tantrum or fit.”

But through the program they work on, she says Kennedy is able to show her if he is hungry or thirsty. He has even mastered what is “please,” even though he can’t say it yet.

Murray got the idea for flash card teaching from a website called www.babycentre.ca. She used it during her pregnancy, and it has all kinds of tips, information and other resources for pregnant mothers. She used it throughout the different stages and it helped a great deal. Now she is using it and its links to assist her in the challenge of raising her babies.

Children learn so fast, she said. In fact, the fastest period for learning is until age five. Babies absorb a greater volume of information, socializing and skill sets than at any other time of life.

Everything is still new and interesting. She said she wanted to encourage that mental growth.

The words on the flash cards contain objects from every room in the house.

“When I give him a bath, I have a flash card and show him the bathtub. The same when I am changing him,” said Murray. “He learns by association. He picks up things a lot faster visually than by just hearing it.”

Murray says the little boy finds the exercise fun, like a game. She even uses it to soothe him when he is upset or fussy. She will put him in his chair and get out the flashcards and engage him, which usually calms him down.

“You have to make sure it is fun,” she warned. “It can’t be resented in any way or the idea of learning will be resented.”

What will happen on the long term? She is not sure, but she has faith that what she’s doing is good.

“I want to do it so it is easier for him to communicate with us and with others as he grows. I think he will be more comfortable expressing himself,” she said. “I want him to be open and opinionated.”