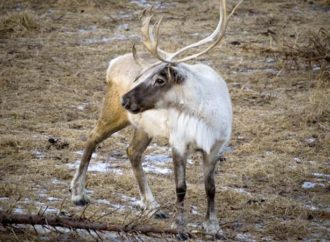 “A population management approach involving management of other wildlife species (i.e. predators and alternate prey) may be required to stop boreal caribou declines and stabilize the local population in order to prevent their extirpation in the short-term,” the strategy states. “Penning of boreal caribou” is one of the given options.

The recommendation echoes a current study being undertaken by industry group Oil Sands Leadership Initiative (OSLI) investigating the feasibility of a fence to protect caribou from predators in the oilsands region.

“OSLI is exploring the possibility of creating a fenced area large enough to contain and protect the primary population of a herd of woodland caribou in the ESAR (East Side Athabasca River) caribou range,” the report states.

The 32,455 square-kilometre area runs along the east side of the Athabasca from Cold Lake, Alberta about 400 km north to Fort McMurray, and contains seven herds of woodland caribou, totaling between 90 and 150 animals.

Hunting, recreational activities and industrial development would still be permitted in the fenced area, but predators like wolves and bears would not have access.

The goal is to rebuild a population that could then be reintroduced into the environment outside the fence.

“No one has ever created a fenced safe zone for woodland caribou management, but it is worth considering whether it’s feasible from a technical, political and ecological perspective to protect caribou until sufficient functional habitat can be restored,” said Jeremy Reid, an OSLI working group member and environmental advisor for oilsands company Nexen.

Around 40 wildlife experts met with OSLI’s land stewardship working group this summer to discuss the creation of a fenced-in safe zone for caribou. The working group also commissioned four independent studies on the feasibility of such a fence, three of which concluded that a fenced enclosure would be technically feasible, but costly and challenging to implement.

The OSLI report noted that the initiative would first require cooperation from the Alberta government and First Nations prior to development.