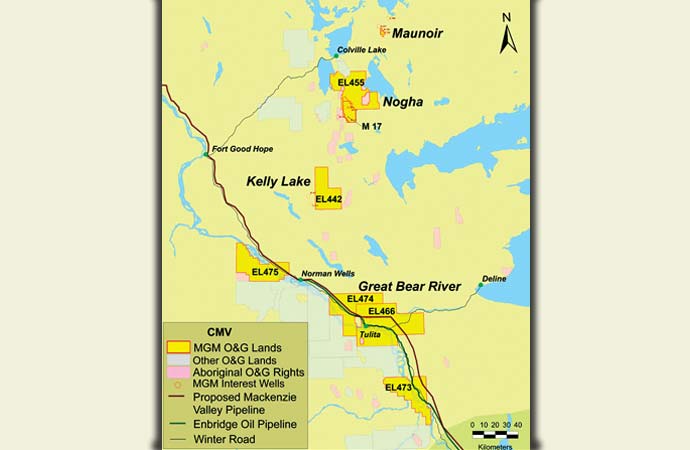 Business proponents in the NWT are crying regulatory foul in the wake of MGM Energy’s cancelled fracking project in the Sahtu.

The oil and gas company rescinded its application to the Sahtu Land and Water Board to drill a horizontal well for shale oil last week after its partner, Shell Canada, declined to pick up the tab for an environmental review on the hydraulic fracturing project.

“MGM Energy simply cannot justify the allocation of resources to pursuing a regulatory process that is uncertain both in terms of requirements and timelines, and thus cost,” said MGM president Henry Sykes, noting it is too soon to invest too much in something at the exploratory phase.

Sykes said the company will continue preparing to drill a vertical well, which it has already received permits for.

While MGM appears to have gotten cold feet over a business deal gone south, the NWT Chamber of Commerce took the opportunity to blame the regulatory system for derailing development in the territory.

“If this same fate befalls the other companies exploring the Central Mackenzie Valley – or if it spooks them into changing their plans to invest in the North – it will be a long time before this sort of opportunity returns to our territory,” said NWT Chamber president Hughie Graham. “It is imperative that the federal government and (Aboriginal Affairs and Northern Development) Minister Duncan follow through on their longstanding promise to reform the regulatory regime in the NWT before a bucket of ice water is allowed to be dumped on our collective future.”

Nobody mentioned the lowering price of domestic oil and gas as being potentially responsible. Last week, Texas oil was getting $23 less per barrel than one produced in the North Sea of Europe, and some economists think the price could drop further in the next term, below $80 a barrel.

Complaints from the Chamber have not gone unchallenged, however. A coalition of environmentalists, social justice groups and First Nations defended the NWT’s regulatory regime last week, arguing any problem with environmental assessment lies on the desk of bureaucrats in Ottawa, not North of 60.

“Over the past 13 years, the federal government has failed to live up to its legal obligation to properly implement and fund the NWT resource management system,” reads the collective statement by the  Dene Nation, Alternatives North and Ecology North, published last week.

“In many cases, NWT boards have done their work quickly and efficiently, only to have their reports sit on the minister’s desk in Ottawa for months or even years before he makes the final decision. Two independent audits have confirmed the problems lay mostly at the feet of the federal government. The federal government has not responded to these audits.”

The coalition said business proponents are wrongly trying to frame the made-in-the-North regulatory system as a “bogeyman that can ‘spook’ and scare away billionaire multi-national companies” in order to do away with necessary environmental protections.

“Are those who are crying foul over the MGM cancellation really suggesting that Northerners should not have the right to know more about the proposed fracturing operations?” they said.

“Poorly planned projects with unknown risks should not go ahead. Otherwise, we will end up with more Giant or Colomac mines. We are very worried about ideologically-driven dismantling of our environmental management legislation that has been thoughtfully established over decades.”

The federal government is currently preparing to make amendments to the Mackenzie Valley Resource Management Act, established in 1999, as part of its “Action Plan to Improve Northern Regulatory Regimes.” The proposed amendments, opposed by First Nations across the territory, include restructuring land and water boards secured through settled land claims into one “superboard.”

Despite complaints, industry invested $500 million on exploration rights in the Sahtu in 2011. Remaining companies Imperial Oil, ConocoPhillips, Husky and Shell are set to do more exploratory work in the region this winter, including garnering baseline geological and environmental information.