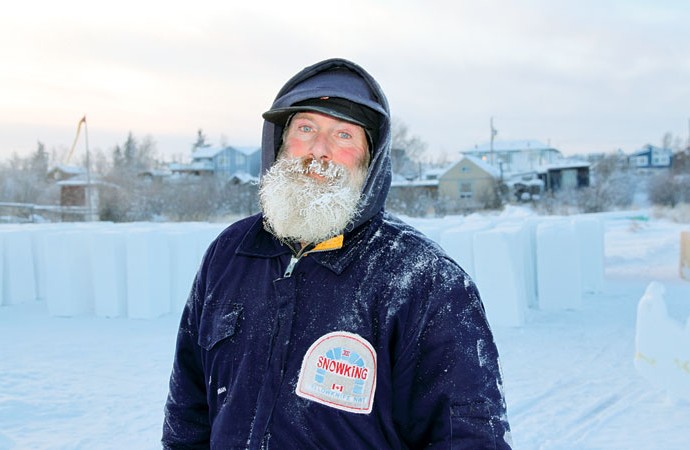 The monarchy in Yellowknife is busy these days.

The month-long festival begins Mar. 1 and is one of Yellowknife’s largest draws for tourism. It includes live entertainment, art exhibits, a film festival and much more, all happening within the frozen fortress built entirely of ice and snow.

Construction begins every New Year’s Day to have the castle ready on time, Foliot said.

“We actually cut the ice in November, just when it’s starting to form. Then we stack it all up for windows, stair treads and table tops,” Foliot said. 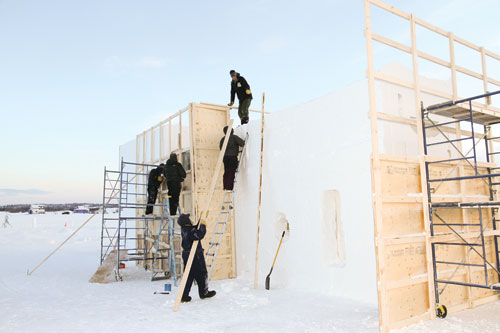 A crew of dedicated festival workers set up frames for castle walls on a frosty Jan. 14. Work started at the crack of the new year. (Photo: Don Jaque)

They cut 300 blocks, 4 feet by 20 inches by 20 inches. Foliot has a number of specialized winter tools to get the job done, including a 6.5-foot ice saw and 4-foot snow saw.

The glistening white structure will measure about 100 by 75 feet overall, Foliot said, noting it all depends on how much snow they can get their hands on.

“Right now we’re running out of snow out here…Might have to get some of it transported onto the bay.”

The Snow King’s crew has blown about 130 tonnes of snow into the castle walls since Jan. 18. On Jan. 23 alone they poured 45 tonnes of snow.

Conditions are far from ideal for building an entire castle, complete with a main hall, chapel, second storey and four grottos. Foliot said there was an ugly east wind blowing snow sideways at them last week with temperatures in the -30C range.

“The cold can wreak havoc on the machines. But we’re not amateurs. We’re all artisans and we love it.”

Most of Foliot’s staff are volunteers, but he does have a couple of paid workers as the festival has grown in popularity and gained support from the government and community. Some members of the crew have been building the snow castle for the past five to eight years, he said.

The Snow King Winter Festival was a direct response to Yellowknife’s former winter festival, the Caribou Carnival, which was “only a two-day thing and if you missed it, that was it,” Foliot said. “I thought, well, we’re a winter city – we should have more in the winter. So I did my own thing.”

The idea for a public castle came to him almost two decades ago when his son and the neighbourhood children were making a simple snow fort in the Woodyard area of the city.

The Snow King and a friend, now known as Sir Shiverin’ Sam, went out to help the children and when the young ones headed inside to warm up, Foliot and Sam stayed outside to finish.

It all snowballed from there, Foliot chuckled.