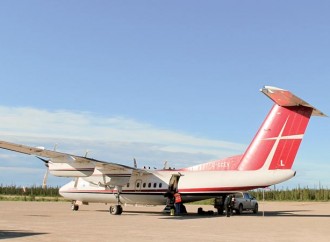 Marijuana use and marginal weather were factors in the fatal Air Tindi bush plane crash that killed two and injured two others near Lutsel K’e in the fall of 2011, according to the investigation report released by the Transportation Safety Board of Canada (TSB) last Wednesday.

The Cessna 208B Caravan aircraft was operating under visual flight rules, under which the pilot must maintain constant visual reference to the ground, in daylight hours when it crashed into a cliff 200 km west of Lutsel K’e near the crest of the Pehtei Peninsula on Oct. 4, 2011.

Pilot Matthew Brody, 28, and passenger Timothy Harris, 54, were killed. The other two passengers, Bernice Marlowe and Sheldon Catholique, both of Lutsel K’e, were seriously injured.

The TSB found that while no emergency locator transmitter signal had been received, the device was found to be operational when the search team located the aircraft. The search team had been deployed after the flight did not arrive on time.

The report stated that the aircraft was flown “at low altitude into an area of low forward visibility, which prevented the pilot from seeing and avoiding terrain.”

Weather was marginal for VFR flight, the board noted, and the aircraft did not have a terrain awareness and warning system (TAWS) or terrain-warning features on its GPS.
The board said it could not be determined why the pilot chose to fly under VFR.

“The pilot, aircraft and company were all qualified to operate under instrument flight rules (IFR), under which pilots fly using cockpit instruments rather than visual references. Flying under IFR would have provided a margin of safety given the weather conditions,” it stated.

Toxicology tests revealed “concentrations of cannabinoids found in the pilot’s bloodstream were sufficient to have impaired pilot performance and decision-making during the flight.”

Since the crash, the TSB said Air Tindi has begun exercising random drug and alcohol tests for employees in safety-sensitive positions and is dispatching all scheduled flights under IFR. Cockpit imaging and flight data monitoring devices have also been installed in all Cessna 208B aircraft.