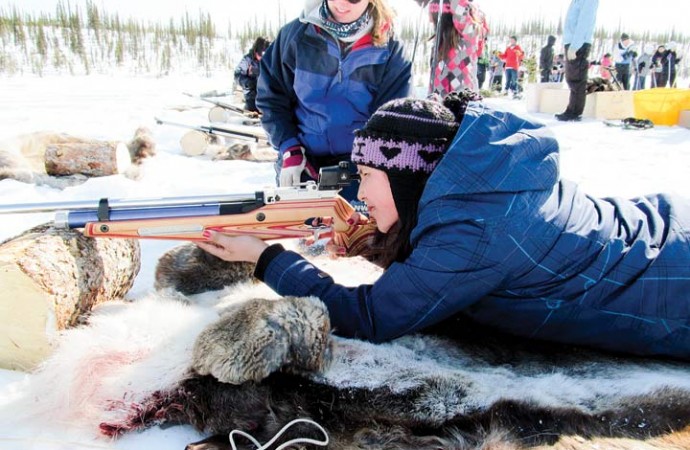 Instructor Katy Pollock watches shooter Lori Gaudet from Deline hone in on her target from atop a caribou hide during the biathlon event. Photo courtesy of Karen Johnson.

The NWT Ski Division and NWT Biathlon came together to help pool resources for the new Sahtu Skifest, which saw 35 skiers come out for a skill-building, farewell-to-winter weekend in Colville Lake on Apr. 13-14.

“The general consensus from all participants is that it would be fantastic if it could happen every year. It would really build the sport and build connection amongst students and teaching staff from the five Sahtu communities,” Karen Johnson, Ski North coordinator, said in an email.

On the morning of Apr. 13, the skiers, ranging from age 8 to 15, rotated through three stations to improve their biathlon techniques, Johnson said. That afternoon, the group completed a mass start relay twice. 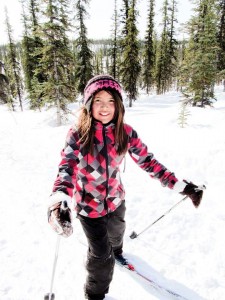 “First each skier shot one clip. Then the coaches upped the ante and the students were challenged to shoot until they hit all five targets,” Johnson said. “Many of them were excellent shooters.”

A challenge “ski and shoot” was held Apr. 14 where each participant skied up to the range from the school, shot their clip, collected a chocolate easter egg, skied a loop on the trail, then shot again.

The students were challenged to ski as many loops as they could in a given period of time, Johnson noted.

“These students were very determined. One skier went around four times and the coaches were surprised that some skiers went around a second time after a challenging first tour. There were two challenging uphills on the ski course. Other kids were not especially keen on the skiing but they kept going so they could have their turn in the shooting range,” she said.