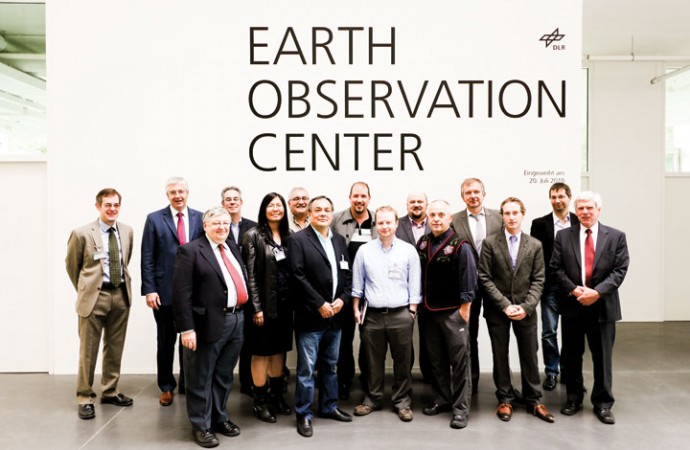 The NWT delegation meets with officials of the German Space Agency in Munich in May.Photo courtesy of the DLR German Aerospace Centre.

Space agencies in Europe are pushing for construction of the proposed NWT fibre-optic link in order to transform Inuvik into an international hotspot for satellite remote sensing technology.

Representatives from the territorial government along with potential partners in the fibre-optic line project, including representatives from the Inuvialuit, Gwich’in and Sahtu regions, recently returned from a visit to Kiruna, Sweden and Munich, Germany where they met with various groups involved with remote sensing in the High Arctic.

“We met with all the people who run the space agencies…and there is enormous interest in Inuvik, but it’s all predicated on the fibre-optic line being put in because they need to have near time access to that information – near time being within 15 minutes,” Environment and Natural Resources Minister Michael Miltenberger told The Journal.

Remote sensing allows satellites and aircraft to acquire images and information about the surface of the earth, the atmosphere and oceans through electromagnetic signals. The technology is considered crucial for everything from air traffic control to national defence, atmospheric science, topographic mapping and environmental management.

Both the Swedish Space Corp. and German Space Corp. have satellite dishes installed in Inuvik, but because there’s no fibre-optic infrastructure, information downloaded from satellites must be put on discs and sent through the mail, a process that can take weeks.

“Now, with the new level of technology, the new expectation is that they want to be able to download the information and be able to ship it by fibre-optic line, by internet, to wherever it has to go so it can get there literally within minutes,” Miltenberger said. “A lot of it’s very topical, it’s very important, and they can’t wait weeks to get the information that they need.”

Miltenberger said Inuvik is the coveted hotspot for remote sensing technologies because of its political and geographic location. Though Europe was contemplating setting up a station in Prudhoe Bay, Alaska, space agencies are reticent because of American laws that allow the US government to access information and turn off equipment if deemed to be in the national interest.

Inuvik is also considered to be “geographically gifted,” Miltenberger said.

“They’ve looked all around in the North, the high altitude places…and Inuvik is almost in the middle (of the area of interest). It’s a high altitude, it has good plane access, it has road access and with fibre-optic, it will have the best cutting-edge communications technology in the world,” he said.

“If the fibre-optic line goes in, then Inuvik will be the ground station for remote sensing in North America,” Miltenberger said he was told in Munich. “They’re very keen to see Inuvik go ahead.”

Miltenberger said community government officials in Kiruna reported close to 500 new jobs in the city of 18,000, created over the last 50 years by the knowledge-based industry of remote sensing.

He said the community of Inuvik could similarly benefit from an economic driver that does not rely on resource extraction. Like Inuvik, Kiruna is a resource town. Its iron ore mine – one of the biggest in the world – is a major source of jobs in the area, but economically unstable.

“They started very small, and as the technology improved in terms of satellites and remote sensing and all that type of thing, they’ve grown over time, whereas they were very concerned about the mine there, the ups and downs of the resource sector,” Miltenberger said.

“It’s the same in Inuvik with the oil and gas: they’ve been through those major downturns and recovery and concerns that the recovery may not last. So they’ve been focusing a lot on the mine, but the reality is the same thing we’re anticipating in Inuvik. They have all that remote sensing industry there, and the whole community is set up so that it provides an enormously levelling and stabilizing effect on the economy.”

Miltenberger said the territorial government is now moving “full speed ahead” on the fibre-optic line project, not only to spark economic growth in Inuvik, but to open up the whole Mackenzie Valley to better government services, educational opportunities and industrial development.

“The trip was an eye-opener for myself, for sure, and all the folks that were on the trip representing us from the Inuvialuit, Gwich’in and Sahtu are of the same mind that this has enormous potential,” he said, noting that the industry could generate $100-150 million a year in the NWT.

“Inuvik will have an opportunity to, over time, grow into the same type of operation that they have in Kiruna, if not exceed it.”