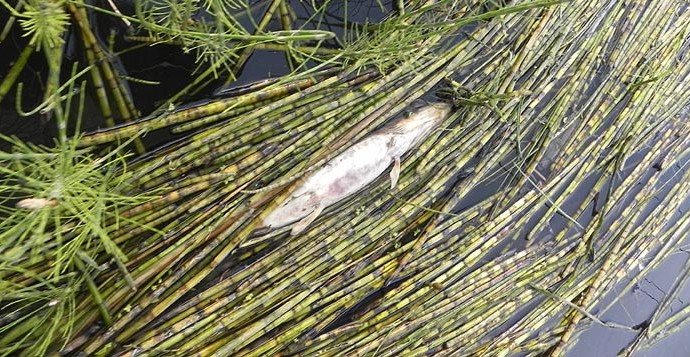 A dead fish floats belly up on the water near Fort Chipewyan.Photo: courtesy of Bruce Maclean.

Concerns are mounting in Fort Chipewyan as more and more dead fish are discovered on nearby waterways, now washing up an “oily sheen” onto the shores of the community.

Multiple accounts coming from First Nation members and Parks Canada employees are reporting dozens of dead fish found at different sites along the rivers and lake near the community.

One count recorded 122 dead fish on Grousie Creek near Quatre Fourches. Another half dozen dead fish were spotted on the Hay River. Samples were taken from both locations.

Others observed dead fish by the Athabasca Chipewyan First Nation (ACFN) reserve and on Lake Athabasca.

“It doesn’t appear to be a giant, one-location fishkill, but I mean that coinciding with the oily sheen is disconcerting to say the least,” said Bruce Maclean, research coordinator for the Mikisew Cree First Nation’s Government and Industry Relations (GIR) department, in charge of coordinating community-based water monitoring efforts on the river.

The dead fish are being collected and sent to the Canadian Cooperative Wildlife Health Centre at the University of Saskatchewan (U of S) for analysis to find out what is causing the die-off, but it could be weeks before a cause of death is confirmed.

The fish will then be sent to Dr. Paul Jones at the U of S Toxicology Centre to be screened for having been in contact with naphthenic acids or polycyclic aromatic hydrocarbons (PAHs), Maclean said. Jones is currently leading a fish health study in the oilsands region.

Water samples have also been collected and are in the lab, with results expected within the next day or so. Data from the Environment Canada Pisces water monitoring station further downstream at Fitzgerald, Alta. will be able to discern whether or not any presence of oil is natural or “refined.” 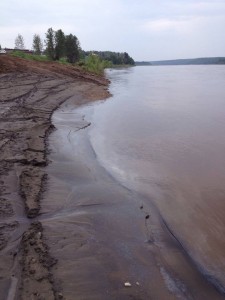 The Athabasca River is slick with an oily sheen the Alberta government claims is a natural occurrence.

“For me, I’m unsure of what it is,” Maclean said of the slick. “Everyone I trust the most in Chip is saying it’s clearly fuel: it smells like fuel, looks like fuel. People have seen stuff like this before when there was a spill. It does demonstrate a few organic properties, though,” similar to algae or microbial bacteria, he added.

The “oily sheen,” first seen Saturday morning near the ACFN’s Poplar Grove reserve about 60 km north of Fort McMurray, where it was reported to be about 5-km in length, quickly grew to an estimated 100-km long slick spanning the width of the river by that evening, according to reports from ACFN Chief Allan Adam, who did a flyover.

After raising the alarm, the First Nation was told by Alberta’s department of Environment and Sustainable Resource Development (ESRD) that the alleged spill was likely of natural causes, as all oilsands companies along the river were asked to perform inspections and none could report a breach in their systems.

Following a flyover from McMurray to Fort Chipewyan on the weekend, ESRD told The Journal the sheen appeared to be silt, which could contain bitumen from naturally-occurring deposits along the riverbanks, but that the matter was still under investigation. 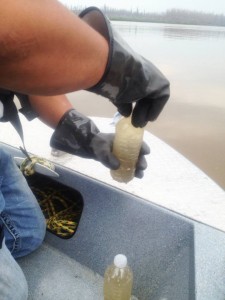 The spill appeared to have moved down the main channel of the river, according to reports from community water monitors, then moved through the delta. Maclean said he was awaiting reports to see if it was still coming down the river as of Tuesday afternoon.

Despite word from the Alberta government that the cause of the unidentified sheen is natural, the community of Fort Chipewyan says something needs to be done to address what could be a petrochemical spill on its beaches and delta.

“Anywhere else in Canada, if there was a suspected oil spill, you’d think people might take measures to contain it. I don’t see any effort being done to contain it,” Maclean said. “You can’t just throw your hands up in the air and say it’s a natural bitumen spill.

“If this is petroleum product and it’s all over the beaches in Fort Chip, what’s anyone doing? It’s a pretty weak response.”

The municipality shut down water intake at the Fort Chipewyan Water Treatment Centre as a precautionary measure on Sunday and ESRD spokesperson Jessica Potter said the department continues to do water sampling.

“Given that there’s a high stream flow and hot weather, there’s bitumen in those banks, so we’re doing monitoring to see if we can find evidence of a hydrocarbon spill, or whether this is naturally seeping bitumen,” she said.

She said there are no containment or cleanup efforts in the works, as natural bitumen spills “have been going on for millennia,” despite claims from local land-users that the size and extent of the current spill is unprecedented.

“We’re investigating, because we want to know what it is and where it came from. I think that’s the most important piece,” she said, adding that employees from the department are checking out affected beaches.

“We’re following up on all the complaints and information we’re receiving,” she said, but noted she had not heard concerns about dead fish. 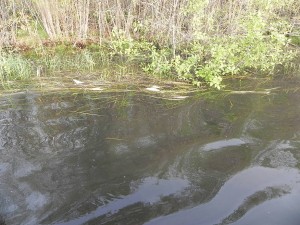 Dead fish are seen floating along the shoreline.

Speculation as to what might have caused the spill to occur naturally points to high water levels upstream coupled with hot temperatures and rain as responsible for the large amount of bitumen to be released into the river at once.

But Maclean said claims to it being natural do not let industry off the hook.

“It’s a theory, but it’s also a theory that relates back to poor management of runoff from these plant sites. Like this isn’t just water sitting on normal, undisturbed boreal forest…Just the nature of it feels like something burst or released or overflowed,” he said.

He said he wants assurances that compliance staff have been visiting oilsands sites to ensure no upsets have occurred, and more investigation done by the provincial government into what is causing the spill.

“They were pretty quick to say Saturday that it was likely natural, so that’s great. Thanks for telling us that…but what are you basing that on? That’s a pretty quick response from the Alberta government to say that it’s nothing when there’s a 100-km long sheen that no one really knows where it’s from.”