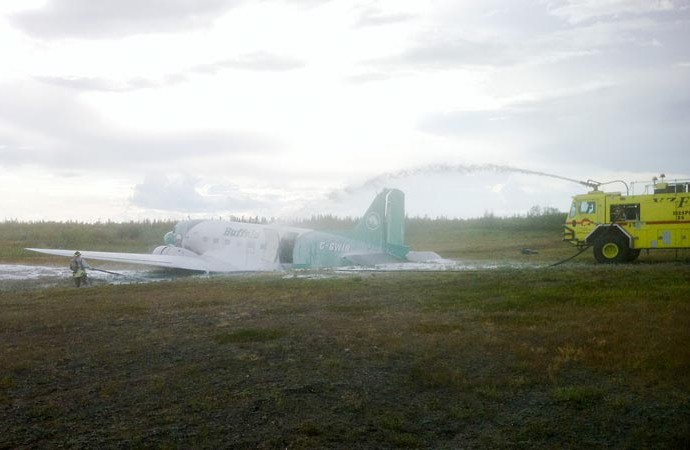 Firefighters put out the blaze aboard Buffalo Airways’ vintage Douglas DC-3 that crash landed shortly after takeoff from Yellowknife last Monday evening on its way to Hay River.Photo: David Connelly

The fate of passengers aboard a Buffalo Airways DC-3 that crashed shortly after takeoff in Yellowknife on Monday may have been worse if not for the actions of its pilots, say two who were aboard.

Stephane Millette and Dave Connelly were among 18 passengers who boarded C-GWIR, a vintage Douglas DC-3 aircraft headed for Hay River on Monday evening.

About 30 seconds after takeoff, passengers on the right side of the cabin noticed flames coming from the right engine.

The stream of fire coming from the engine was about three to four feet in length, said Connelly, a board member for Avalon Rare Metals, who was on his way to Hay River to attend the Prime Minister’s visit.

“It was that classic thing that you see in the movies,” he said.

At that point, Connelly said the flight attendant went into the cockpit to alert the two pilots about what was happening. They reacted immediately, he said.

“You could see the co-pilot was reading through the checklist, which is what you’re supposed to do, I gather,” Connelly said.

Millette, who is principal at Hay River’s École Boréale school, also felt at that point like he was in good hands.

“It just seemed like they were doing everything perfectly,” he said.

They then began to bring the aircraft around to return to the airport.

“It was a long, slow turn and by this time the prop on the right-hand side was dead and the one on the left was giving it everything it (had),” Connelly said.

Once the airport was in sight, Connelly said it became apparent that the plane was descending too quickly to make it back to the airstrip.

“I speculated at that point that he was going to ditch or go for a road, because the other option at that point was rock or rock with trees on it.”

But, Connelly said, the captain kept the plane on course for the Yellowknife airport.

“He made…a good decision to go for the airport,” he said, despite the plane having to clear two sets of obstacles before making the airport grounds: power lines and trees.

“It started to get a little bit tense because it was clear that we were descending no matter how much thrust he put on,” Connelly recounted. “I think the most heart-stopping, gut-wrenching moment was…in my view he just cleared the power lines.”

“My understanding is that when you hit the power lines, plane loses, power line wins.”

After clearing the lines – only by mere feet, Connelly attested – the plane began to descend into the trees.

At this point, he said he was happy to be aboard a heavy old plane.

“The trees didn’t slice through the plane; the plane sliced through the trees” in a manner that was reminiscent of “a weed eater cutting through grass,” Connelly said.

“Everyone is ok. The crew was amazing. The DC-3 is the strongest airplane in the world,” he said.

Once the plane got through the trees, Connelly said it eventually landed on its belly on the grass infield at the airport, short of the runway.

When the plane hit the ground it began to spin, likely due to the propellor digging into the soft earth. Connelly said the G-forces were quite tremendous, likening them to an amusement park ride.

Once the plane stopped, Millette said the crew was quick to get everyone safely off the aircraft.

“The staff got right in charge right away and got everybody out of the plane quick,” he said.

Connelly said everyone exited through the rear door of the aircraft, where there were no steps, so he aided other passengers down to the ground.

Firefighters reached the aircraft within five minutes of the passengers evacuating, according to Bill Mercer, another passenger, and began to douse the still-flaming engine.

Despite the severity of the situation, both Millette and Connelly said all passengers remained calm for the most part.

“Nobody was panicked,” Millette said. “The only time it was a little more nervous is once the plane came down and we had to get out quick to let the firefighters spray the plane down.”
Connelly, for his part, said only when the plane started hitting the trees did he notice other passengers “(expressing) themselves emotionally.”

Both agree the outcome could have been worse if not for the actions of the crew.

“The pilots and the staff did an awesome job,” Millette said.

After being checked out by ambulance staff, the passengers were given a ride back to the Buffalo Airways hangar, where they were offered coffee and pizza while they awaited “Buffalo” Joe McBryan, who had piloted an earlier scheduled flight to Hay River, to fly back and pick them up to complete their journey across Great Slave Lake.

Aside from pilot heroics, Connelly felt a bit of serendipity may have contributed to the passengers’ good fortunes that day. The previous flight had been loaded with all checked luggage from both flights, saving perhaps hundreds of pounds of extra weight from being aboard the ill-fated plane.

Connelly said a few passengers were also transferred from the later flight to Hay River to the earlier one – among them Premier Bob McLeod.

“From that point of view, I think the premier saved our lives,” he said.

Although he had nothing but compliments for the flight crew, firefighters, police and ambulance, Connelly said when it came to getting the passengers away from the landing strip and back to the hangar, “it just didn’t seem to come together.”

Connelly said passengers were left standing on the airport infield for close to 45 minutes before being offered rides back to Buffalo’s hangar in the ambulances.

“What eventually drove it is there was an airplane circling with only 20 minutes fuel left and at that point they reckoned they had better get the people out of there.”

Michael Conway, regional superintendent for the NWT department of Transportation in Yellowknife, said the airport staff were simply following protocols, which require them to wait for the nod from the Transportation Safety Board before moving passengers or the aircraft.

“17:15 is when the plane actually came to rest,” he said. “Within 30 seconds, we had firefighters there…But we can’t move anyway until the Transportation Safety Board states that. So they told us at 17:41 that the passengers could be returned to Buffalo Airways. At 17:42, the first shuttle was requested to take the passengers there. So there was certainly no delay on our part.”

Despite the harrowing experience, Connelly said everything was back to normal very quickly, as once McBryan was able to return for the stranded passengers, they made it into Hay River by 8:00 p.m.

“A near-death experience and two hours delayed,” he said.

Both passengers said they have no hesitation about flying in a DC-3 again in the near future.

“Those planes were built to (survive a) crash,” Millette said.

Connelly, who said this was his first major incident in 30 years of flying in the North, was also undeterred, but did say that a bottle of scotch greeting him in the arms of a friend as he finally arrived in Hay River was a welcome sight.

“That was greatly appreciated.”

The Transportation Safety Board investigation into the crash is currently ongoing.

*With files from Meagan Wohlberg