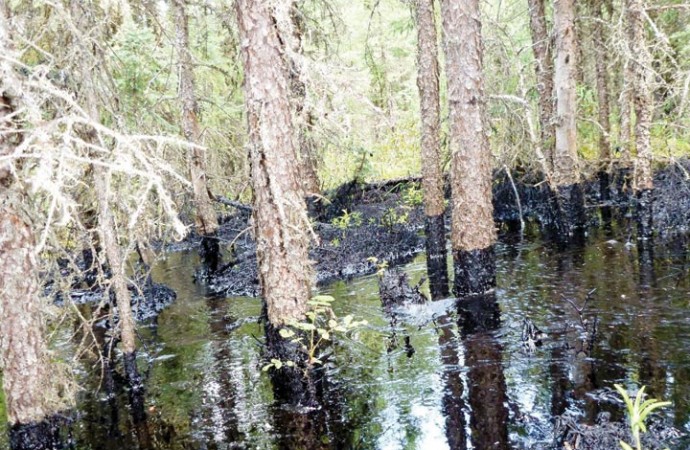 Bitumen is continuing to ooze to the surface in four separate locations in the boreal forest area around Cold Lake, Alta., months after the first leak from an underground oilsands well was reported, the Alberta Energy Regulator (AER) said on Friday.

Canadian Natural Resources Ltd. (CNRL), the company running the in situ Primrose and Wolf Lake site where the releases are occurring, said the incident is “under control” and cleanup efforts have begun.

“Each location has been secured and cleanup, recovery and reclamation activities are well underway,” stated a company press release on July 31. “The bitumen emulsion does not pose a risk to health or human safety.”

Bitumen emulsion was found covering an area of about 20.7 hectares. The first leak was reported in May, the fourth on June 24 and as of July 31, 6,300 barrels of bitumen emulsion had been collected.

According to CNRL, the rate of bitumen emulsion seepage in all four locations has declined and totals less than 20 barrels a day. Groundwater monitoring activities are underway as well as aquatic and sediment sampling to determine impacts.

CNRL reports that 16 birds have died as a result of the leaks, as well as seven small mammals and 38 amphibians. Two beavers, two birds and two muskrats are currently being cared for as cleanup continues. Fencing has been put up to deter further wildlife from entering the area.

The Cold Lake First Nation, whose traditional territory in the Cold Lake Air Weapons Range has been directly affected, are “extremely” concerned about the incident.

“There is no way to calculate the damage inflicted upon us by this latest blow out,” Cold Lake First Nation council member Cecil Janvier said in a press release last week.

“Cold Lake First Nations will continue to take all legally available measures to protect our lands and wildlife. Species are at risk and this oil spill is further endangering the woodland caribou and adversely affecting other animals…important to our Dene peoples.”

The Dene of Buffalo River have also voiced concern, calling on Prime Minister Stephen Harper to intervene in the oil spill and force the disclosure of all information to the public about the exact spill locations and cleanup efforts.

AER said it has been working with the company to get the releases under control and understand how they happened in the first place.

“The AER’s formal investigation into the cause of these incidents is actively underway. We do not currently have the evidence or data to support any conclusions,” AER CEO Jim Ellis said in an Aug. 2 press release.

CNRL believes the cause of the leaks is related to “mechanical failures of wellbores.”

All steaming operations (a process used to extract the oil) have been suspended at the site and will remain so until the regulator is satisfied measures are in place to prevent similar future occurrences.

A similar blowout occurred with CNRL in 2009, which the company blames on the failure of the integrity of one of its wells.