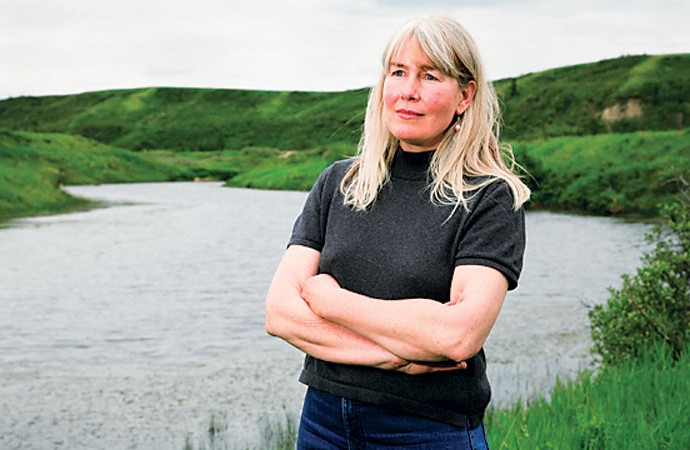 Alberta landowner and oil patch consultant Jessica Ernst says proper information on fracking chemicals and their impacts on human health and the environment is not being disclosed to the government, regulators or the public.Photo: Colin Smith.

The water license recently issued to ConocoPhillips for the first horizontal fracking activity in the Northwest Territories contains a legal loophole that should be cause of serious concern for the public, emergency responders and oilfield workers, according to critics.

The license, awarded by the Sahtu Land and Water Board (SLWB) in June, requires the company to disclose all chemicals used while fracking with two exploratory wells south of Norman Wells, with the exception of those chemicals deemed to be “trade secrets.”

But where the company considers the “specific identity of a chemical ingredient” to be a proprietary right, “a more general identification is to be used consistent with the MSDS,” the conditions of the license state.

According to Jessica Ernst, an oil patch consultant and landowner from Alberta currently engaged in legal action against Encana for allegedly polluting her community’s water through fracking, the incomplete list of chemicals being supplied to regulators, the public and emergency responders is putting the environment and human safety at serious risk.

“If fracking starts to ramp up – and we have thousands of wells in Alberta – in terms of the first responders, how do you prepare your emergency people in hospitals and fire halls, medics, etc, if they don’t know the potential risks they may be facing?” she said. “The workers – why should the workers be exposed to chemicals that might be harming their health if they don’t know?”

There is precedence for Ernst’s concerns. In 2008, an emergency room nurse in Colorado, Cathy Behr, nearly died after being exposed to a “mystery frac chemical” a patient was doused in. She lost her sense of smell and spent 30 hours in intensive care after her organs began shutting down.

Although the company provided MSDS sheets to Behr’s doctors at the time of the incident, it refused to provide them with more specific information once she fell ill, according to news reports, meaning her doctor had to guess what to do to keep her alive.

More recently, responders to the train derailment and explosions that took place in Lac Mégantic, Que. were not told the oil in the tankers was fracked from the Bakken shale play containing chemical additives. That oil has now sunk to the bottom of the adjacent river, challenging cleanup efforts.

“How can they properly protect themselves when they fight a fire or deal with a spill at an emergency if they don’t know what chemicals are in those tanks?” Ernst asked. “Never mind the people who live beside the site and are breathing the toxins.”

Ernst said workers and emergency responders in the North have more to lose when response and travel time is taken into consideration for emergency transportation.

“You’re isolated up there in the Territories, so what if a worker is doused in toxic secret sauce and comes into emergency and nobody can warn any of the emergency staff how to protect themselves? They don’t know what kind of respirators to wear, whether to put him into isolation, whether other patients will be at risk from him dripping toxic chemicals into a hospital,” she said. “You have communities far apart, which makes it worse because a person who might be exposed would have to travel further and be exposed longer to get to a hospital.”

Board given MSDS sheets for additives

Fracking, a controversial and unconventional oil and gas drilling process, injects chemically altered water and sand at high speeds underground to hydraulically fracture, or “frac,” the shale bed, releasing petroleum which is then pushed up through a well.

The leftover solution of toxic wastewater is either injected into underground storage tanks or, as ConocoPhillips plans, is hauled by truck to a dump site.

The chemicals added to the mix include a range of solvents, gelling agents, friction-reducing agents and non-emulsifiers, among others, often listed by product or brand name or based on their purpose.

For example, the list of chemicals and their MSDS sheets submitted by ConocoPhillips to the SLWB includes a “surfactant,” “breaker,” “water-friction reducing agent” and “X-CIDE™ 207 Industrial Microbiocide,” to name a few.

SLWB executive director Paul Dixon said the board gets information from companies in three ways: first, a list of all potential chemicals, then a risk assessment for those chemicals (to identify if there are less toxic alternatives available) and finally a breakdown of what was used after each frac.

“Basically, there’s a couple different competing companies that run these fracking chemicals, and we get the breakdowns in the chemical MSDS sheets. So that gives us the materials found within each one of those frac fluids and where the frac fluids are commonly used,” Dixon said.

“They disclose what they are, but then when they give us the list for what they used for that specific frac, the exact combinations aren’t given. They’ll give us the MSDS sheet – it will be all the chemicals within there, but the 0.1 or 0.2 per cent or whatever of this component or that component won’t be identified.”

Dixon admitted that MSDS sheets can be “a little bit vague,” but still list the names of the products.

“They’re not going to leave out a chemical, but some MSDS sheets are a little bit more well-refined than others,” he said.

According to Ernst, information contained on these frac fluids’ MSDS sheets is incomplete, with some parts of the solution missing altogether.

For example, X-CIDE’s ingredients only add up to 92 per cent of the fluid when using the max quantity of each additive (if keeping levels to the minimum, 38 per cent of the microbiocide is missing). For “Non-Emulsifying Agent W54” – an additive that contains naphthalene, a red blood cell destroyer, and which “cannot be made non-toxic” – four of the six components are listed as “proprietary” without CAS numbers disclosed.

Ernst said part of the problem is the “trade secrets” loophole, but said the issue has to do with the MSDS sheets in general, which she called a “very good con.” Besides keeping trade secrets secret, by listing a generic product name like “corrosive” as the chemical itself, the sheets leave out what could be three to 500 harmful ingredients contained within, she said.

“They (the board) are getting a number and a name and they think they’re getting a chemical,” she said. “But how much benzine is in each of those products? How much toluene – it’s a known neurotoxin that damages the brain, especially in children?…What acids are they injecting?”

Online disclosure sites like fracfocus.com, recently made mandatory in Alberta, also leave out specific information on chemical ingredients. A list of frac fluids on the website from one example well in Alberta gave no information on three of the additives; for the other four, only brand names were given, with no list of ingredients.

An assessment done by former federal environment commissioner Scott Vaughan on fracking in February confirmed the lack of government knowledge on the chemicals being used.

“Environment Canada and Health Canada told us that while a partial list of substances that are likely to be used in hydraulic fracturing has been developed, a complete list of substances used in Canada is not known,” he wrote, adding:

Ernst said regulatory boards and government are being “conned” into thinking they have the information needed to keep people safe and protect the environment, and should use the power given to them through the Canadian Environmental Protection Act to enforce full disclosure of chemicals, or prevent chemicals from being used until their health effects are studied.

“People have the right to know so they can make an informed, balanced, reasonable choice on whether or not they want to let this industry into their territory, or think of a better way to make energy,” she said.

“If people in the Territories knew that these wastes contained such and such chemicals and were radioactive, perhaps, had a certain concentration of carcinogens, neurotoxins, but the specific deadly chemical identified, I would expect communities anywhere who knew this would refuse to allow it.

“I don’t believe it’s at all about trade secrets.”